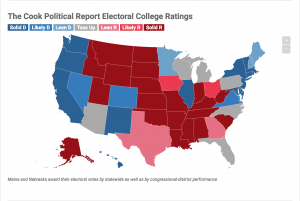 Another ratings update from the Cook Political Report keeps Pennsylvania as a toss-up for the general election.

In an article published on March 23, the election analysts have Pennsylvania as one of the few states in the toss-up column for the general election. Pennsylvania has remained in this column since their debut 2020 Election College Ratings were released in January 2019.

Amy Walter writes in the article on March 23 that despite the coronavirus having a “potential impact” on the president’s approval rating, polling at that time pointed to his ratings remaining nearly the same. Walter cited NBC/Wall Street Journal, Gallup, and Marist/NPR/PBS polling having Trump’s approval rating between 43-46%. The latest polling, which was released after this article was published, has indicated a slight uptick for Trump with Gallup having his rating at 49% now.

Walter writes in the article that although the Democratic primary campaign between former Vice President Joe Biden and Sen. Bernie Sanders is “temporarily on hold,” due to the coronavirus, that the race is “essentially over” citing Biden’s delegate advantage as an “insurmountable lead for the nomination… barring a complete collapse.”

These election analysts also have Pennsylvania as one of six states with multiple House races currently listed as toss-ups. In their latest House ratings released on March 27, Reps. Matt Cartwright (D-Lackawanna) and Scott Perry (R-York) are both in races listed as toss-ups.