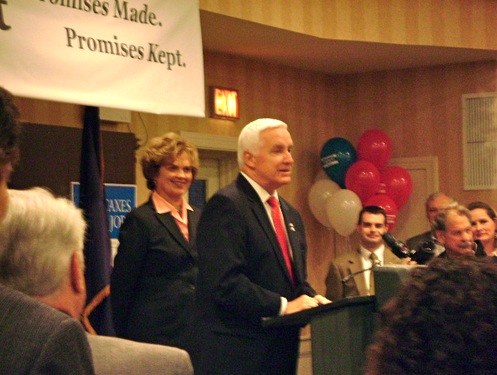 “It’s good to be home,” Cawley said. “I want to praise the Bucks County GOP, which is one of the strongest organizations in the state.”

Cawley served as Bucks County Commissioner before becoming the party’s pick for LG in 2010.

He became more animated as he shifted to his stump speech on why he deserves another term.

“I wouldn’t be doing this if I didn’t believe in what we have done,” Corbett said. “The measure of someone in office is when they say something, do they mean it and do they stand by their word. And we did that.”

“Leadership is making the tough decisions, saying we don’t have the money to spend, that we won’t tax you anymore.”

Bucks County Republican Party headquarters was built in 1867 according to the inscription on the steps, and the exterior seems to confirm that date. Located in the heart of Doylestown, the building has been the center of the GOP apparatus in this highly contested suburban county outside of Philadelphia.

Inside, the local politicos made sure to hang a re-election banner with the slogan “Promises Made. Promises Kept” over the podium and plastered Corbett/Cawley for Governor signs along the walls and as well as dispersing them among the crowd. The flip side of the signs were printed with the campaign’s catchphrase “Less Taxes. More Jobs.”

Besides the formality of a podium and a few chairs, it was mostly a free-flowing event with most of the spectators standing in the middle of the room. This left little distance between the Governor and his adoring crowd. The attendees numbered at least several dozen and could very well have reached a hundred.

Gov. Corbett took time to praise the work his administration has done on energy and caring for the disabled. He also included a strident defense of this education policy, an issue that will likely be repeatedly litigated during the upcoming campaign.

“We didn’t cut education, that was done before we got there,” he asserted. “Pennsylvania spends more money on education now than at any time in state history. It is 40% of the budget, and the number one item in the budget is education.”

Lt. Gov. Cawley also took on one of the traditional roles of a running mate; hammering the opposition. Even if the opposition doesn’t officially exist yet.

“Our opponents, they don’t get it,” the Lt. Gov said. “They believe in the Obama White House agenda of more taxes, more regulation, more government, and more spending. We have eight announced opponents. Which of the eight is gonna stand up to this President? Apologies are nice, but the Affordable Care Act doesn’t work, you’ve blown it.”

The Governor expressed mock surprise that those on the bus had made it this far without being at each other’s throats – with three more stops to go after the Bucks event.

Finally, Corbett finished with a promise of victory.

“362 days from now we will be celebrating re-election and we will know we kept Pennsylvania on the right course.”

With that, he gave a final wave to the crowd, poised one more moment for photos, then disappeared out the back door to the bus and on to the next of many more campaign events.