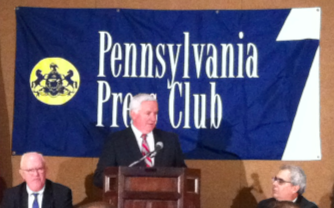 He talked about efforts to reform unemployment compensation, rescue the southeast Pa. refineries, bring the Shell ethane cracker plant to Pa., and bail out shipbuilders at the port of Philadelphia – each of which had the support both of business and labor.

“Working with organized labor, they support this effort,” he said of UC reform. “We’ve had a couple times where we’ve seen bipartisanship break out, particularly in the last year.”

He also boasted on keeping his pledge of no new taxes and business-friendly reforms.

With the 2012 election in the books, the Governor now faces his own re-election this cycle.

Asked to say something nice about newly re-elected Pa. Treasurer Rob McCord, widely considered a sure bet to challenge Corbett, the Governor said, “Frankly, I see Rob every once and awhile. I haven’t analyzed whether he’s done a great job or a bad job, but he hasn’t been in the news with you all so, he must be OK.”

“I told, I said I think he’s a nice guy,” Corbett laughed.

Some other notes from his speech:

Corbett said he will lobby for a transportation funding bill in 2013, as well as a fix for the state pensions and privatization of the state liquor stores. He seemed less interested in plans to privatize the management of the Pa. lottery.

The state will bide its time on expanding Medicare and addressing the forthcoming mandates of the health care law, he said, until more guidance from the administration.

He emphasized his hope that lawmakers will cooperate to avoid the “fiscal cliff” and the doom and gloom that awaits every state if they don’t. “I fear for the economy. I fear for another recession,” he said.

Asked whether he’d support a proposal to have the city of Philadelphia go in on a new casino in exchange for part of the revenue to the city and school district, Corbett deferred totally. “Nothing. I’m not involved in that license,” he said. “It’s the role of the Governor to not be involved in that.”

In other Governor 2014 campaign news:

John Hanger will be hosting a Pa. Society reception. As Capitol Ideas notes, it’s a clear sign that the former DEP Secretary is more like a “probably” candidate than a “maybe” candidate. He’s also got a preliminary campaign website.

And back in September 2011, PoliticsPA reported that Corbett had drawn his first Democratic challenger: Max Meyers. He’s a minister from Cumberland County with a sleek campaign website.