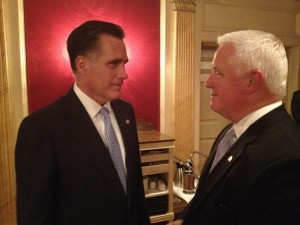 Hours after Mitt Romney delivered a speech in Westmoreland County, he traveled to Pittsburgh’s Duquense Club for a fundraiser held by Governor Tom Corbett.

According to a pool report by Mike Wereschagin of The Pittsburgh Tribune-Review, 300 people attended the joint Romney-RNC event. Tickets for the general reception cost $2,500, with $15,000 for a photo and $50,000 for dinner.

While Corbett did not attend the public event earlier in the day in Westmoreland, he held the fundraiser for both Romney and the RNC. Other notables in the crowd included House Majority Leader Mike Turzai (R-Allegheny), House Speaker Sam Smith (R-Jefferson) and GOP candidates D. Raja and Keith Rothfus (for the 37th and 12 districts). Senate candidate Tom Smith was there as well.

In a speech to the crowd, Romney touched on the trend in states with Republican Governors.

“There’s a pattern here,” Romney said. “In states that have Republican governors that are conservative, that hold down taxes, (they’re) doing pretty well. Forget for a moment party label. Just look at the record of people who are leading right now. And look at the record of this president. Almost everything he has done has made it harder for job creators to create jobs.”

Romney also went on to knock Obama in his speech on a multitude of issues, including the economy, job creation and energy policies.

Update: The PA Dems jumped on the fact that Corbett did not attend the public event, saying that the private fundraiser allowed “both unpopular politicians” to avoid questions about tax returns or “policies that hurt the middle class.”

“The disastrous Corbett-Romney policies hurt Pennsylvania’s middle class, and the more Pennsylvanians learn about both of their agendas, the less they like,” said PA Dems spokesman Mark Nicastre.

“Gov. Corbett’s record of cutting education funding while telling women who are forced to undergo unnecessary medical procedures to ‘just close [their] eyes,’ and Romney’s lies about his time at Bain Capital and failure to release his tax returns are proving to be a damaging one-two punch for Republicans in Pennsylvania. With records like these, it’s not surprising that they don’t want to be seen in public with each other.”