With all of the coverage for the Democratic primary in May, it easy to forget that incumbent Governor Tom Corbett is running for re-election — and plans to win.

Although Corbett should have no trouble winning the Republican primary — his only declared challenger, conservative activist Bob Guzzardi, has said he does not plan to run a rigorous campaign — he still has to win over voters for November. And as of right now, he needs to build his support base.

The governor states that his administration has reduced both state spending and the number of employees in state government, while also limiting the amount of welfare fraud in Pennsylvania — which, in total, saved taxpayers $43 million. 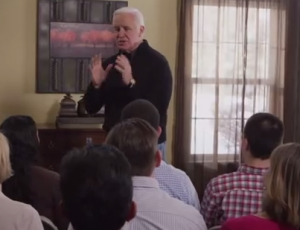 And where does all that money go? Back to the people, Corbett proclaims.

“It’s not the state’s money, it’s the taxpayers money.

“We want the people of Pennsylvania to keep as much money as they can, and we want Pennsylvania’s government to be as efficient as it possibly can,” Corbett says.

The governor also states that he has done exactly what the voters asked him to do three years ago.

“The people of Pennsylvania sent me to Harrisburg, not to make friends but to make a difference, and that is exactly what we’re doing.”

The ad will run on statewide cable for the next week. Because Corbett’s camp did not purchase a broadcast timeslot (which are much more expensive), the bill for the ad only totaled $109,000, a Democratic media consultant told PoliticsPA. In addition, the governor’s ad will only air on Fox News in the Altoona and Scranton area.

The ad shows Corbett sticking to the principles that he says got him elected three years ago. It is an interesting approach, considering only 23% of registered voters believe that he deserves another term in office, according to a poll conducted by Franklin and Marshall.

The commercial is less about how the Governor will make changes and more about how he will continue to fight for what he believes in — a tactic that hasn’t garnered him much support as of late.