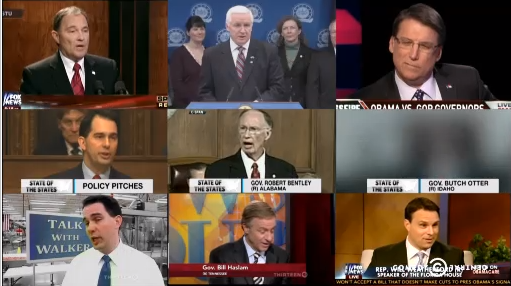 In a new ‘Daily Show’ segment that aired last night, PA Governor Tom Corbett helped one of Jon Stewart’s correspondents get out yet another joke at his expense.

In the segment, correspondent Al Madrigal talked about the states that turned down Medicaid expansion and how it’s affecting the working poor. President Obama’s Affordable Care Act would have allowed states to take federal funds to expand these programs for low-income Americans. Originally, 19 states declined to take this offer.

Madrigal shows, in the map graph of the segment, which states these are. Corbett said that he was still fearful of the costs it would bring, though federal funding would take care of all the costs for the first three years with a gradual decline after that, stopping at 90%. Eventually, Corbett decided to reject Medicaid expansion.

Madrigal sat down with some of the people who are affected by their state declining expansion, who all said that they certainly could’ve used the medical aid.

“So bravo Texas, Tennessee, Florida, and all the others who stood up to the five million working poor, desperate for help,” Madrigal says over pictures of lawmakers from these 19 states, one photo being of Corbett.

Corbett has come out with his own Medicaid plan based on private insurance. The plan is called “Healthy PA”, and with this, the state would accept public dollars to finance private insurance for 500,000 Pennsylvania residents.

Arkansas and Iowa have similar proposals, but Corbett’s has one stipulation that other states don’t: beneficiaries must be actively seeking employment.

“Washington cannot and should not tell citizens want they can buy,” Corbett said at the time of his proposal. “We should not have a one-sized fits all solution from Washington. I believe we must build a plan from the grassroots up growing the private healthcare market while reducing government intervention.”