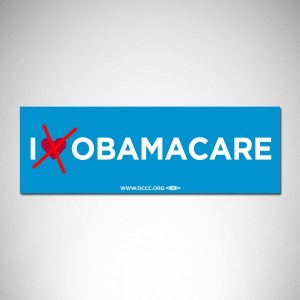 Late this week saw a concerted effort by Gov. Tom Corbett and the Pa. Republican party to pivot the attention of the party base to an issue where the GOP has some momentum: Obamacare.

Corbett and his party are jumping on a delay in a key Affordable Care Act provision. But, their attempts to impede the law’s implementation is not without risk.

Earlier this month, the White House announced that a requirement for business to provide health insurance would be delayed until 2015. Shortly thereafter, Republicans seized the announcement as confirmation that the ACA is bad policy.

“Governor Tom Corbett continues to stand firmly opposed to the federal government’s takeover of your healthcare,” campaign manager Mike Barley wrote in a fundraising email. “From challenging ObamaCare in the courts to rejecting a costly federal exchange, Governor Corbett has sought to protect Pennsylvania from the fallout of flawed public policy that will cost our state jobs.”

“It’s hard for us to not tell Democrats, ‘we told you so’, but this is what happens when you pass a bill before you read it,” echoed PAGOP Chairman Rob Gleason in a separate fundraising email.

“ObamaCare is a terrible [sic]. Even Obama knows it. Which is why he has implemented a one-year delay in carrying out key ObamaCare initiatives.”

It wasn’t exactly a full court press by the PAGOP. It comprised two fundraising emails and a press release. But it’s not every day

The change of subject to a DC topic follows a week of bad headlines from Pa. Corbett and GOP lawmakers turned in a tax-increase-free budget that was signed before the deadline, but went 0-for-3 on big-ticket priorities. That includes liquor privatization, which is a big deal to the Republican base.

Corbett’s poll numbers have shown an enthusiasm gap among Republicans and most observers agree he needs to energize GOP voters as a first step toward re-election.

Corbett’s re-election campaign emphasizes that the Governor rejects the Medicaid program as it stands, but this sort of language could make Medicaid expansion in Pa. difficult to pursue, should Corbett wish to do so.

Although Republicans in Pa. and across the country believe making the ACA an issue will lead to gains in next year’s midterm elections, the strategy is not without risk.

In May, the Associated Press reported that the biggest risk Republicans face is a scenario in which the implementation of the ACA goes reasonably well in states that have chosen to embrace it.

On the flip side, the editorial board of the USA Today blasted the GOP – including Governors like Corbett who have not accepted the Medicaid expansion – for sabotaging the new program.

But it looks like for Corbett’s 2014 hopes, the GOP base must come first. For now, that means rooting against Obamacare and its supporters.

Continued Barley in the email:

“Our political opponents — including Allyson Schwartz, who wanted ObamaCare to be even more over-reaching — continue to demand that Governor Corbett simply step aside and allow portions of ObamaCare to be implemented, sticking taxpayers with the bill for an unstable system that continues to unravel.”