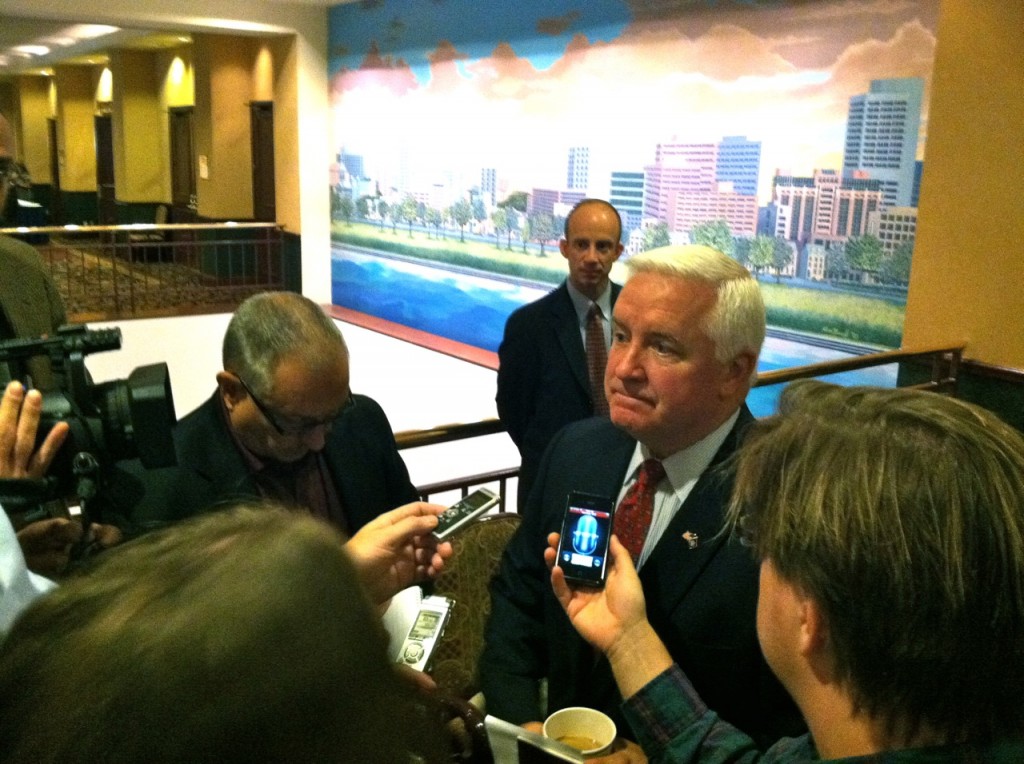 “I always listen,” he said, “I am always open to listening, but I support Senator Pileggi’s bill.”

Corbett spoke to reporters after his remarks to the Republican State Committee fall meeting in the Harrisburg Hilton.

Regarding criticism that he has embraced the plan before sufficient vetting, Corbett said it has been on his radar for months.

“It was brought to my attention back in the spring,” he said, but not by Mike Long and Todd Nyquist – former PA Senate GOP staffers who are lobbying for the change. Their involvement was detailed in a Wednesday column by Capitolwire’s Pete DeCoursey.

Corbett confirmed that he has a meeting with the congressional delegation on Tuesday. He said he was sympathetic to concerns by some members, particularly those in southeast PA, that the plan would result in more difficult elections for suburban Republicans.

Corbett dismissed concerns – voiced by many state committee members over the weekend – that the plan would knock Pennsylvania off the list of battleground states. That, in turn, could mean less financial support from the Republican National Committee.

“I don’t necessarily believe that that’s true. Because if I was spending national money here I’d be bringing in the same amount of money, and maybe even sooner because there would be ten to twelve seats in play that in past instances… they wrote off the state way too early, and they didn’t spend the money.”

He added that he would be willing to fundraise to fill any gap.

After a speech to the home crowd – the Republican state committee members who helped to launch and sustain his political success – Governor Corbett seemed laid back as reporters pressed him on the week’s biggest political issue.

He boasted of the accomplishments of his administration so far – the on-time state budget, reduced spending, and tort reform among others. He encouraged party members to pitch in with financial and volunteer help for the victims of recent flooding in the state.

But after imploring activists to aid local candidates, saying he was, “not gonna get into it.”

“There’s a lot of discussion about the electoral college. I read the paper,” he said. “Do not let it take your eye off the ball. Right now you have this year in front of you. You have county commissioner races, row offices, local races, and these judge races. Keep your eye on the ball.”

Meanwhile, state committee members have mixed reactions to the proposal.

On the floor of Saturday’s meeting, Northhampton County committeewoman Mary Barkett implored the GOP to move slowly on any proposal, and consider all the possible negative impacts.

“It could give Republicans an edge in a close election,” said Schuylkill County GOP Chairman Joe Sterns, a key ally of U.S. Sen. Pat Toomey, R-Lehigh.

Matt Wolfe of Philadelphia saw it the same way: “It seems kinda clear that it would be helpful to the Republican nominee. Since I think it is the highest priority of our party to defeat President Obama,” he supports the bill.

State Committee Central Caucus Chairman Dick Stewart said: “I gotta figure out whether we’re going to win or lose the state in the presidential election next year. If we win, we should leave it as is. If we stay on a losing streak, this is a good idea.”