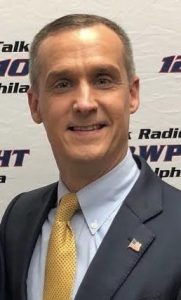 A former campaign manager for President Donald Trump in 2016 and possible Senate hopeful, is heading to the Philadelphia suburbs to headline a local Republican Party’s dinner.

In a release promoting the event, the Montgomery County Republican Party said Lewandowski will provide perspective of “what is really going on in Washington” after his recent testimony before the House Judiciary Committee in Congress in September.

“We are thrilled to hear from Corey fresh off his historic testimony before Congress!,” said Montgomery County GOP Chair Elizabeth Preate Havey. “Several hundred people have purchased tickets to meet the President’s former campaign manager and hear is perspective on what is really going on in Washington.”

Lewandowski has also remained in the news in recent months as his name has been floated as a possible Senate candidate in New Hampshire.

Montgomery County Democratic Party Chair Joe Foster told PoliticsPA that he wishes the Montgomery County Republicans good luck for their dinner saying that he’s sure Lewandowski will be a big draw, but also added his perspective that the local GOP may be leaving behind moderates.

“Corey Lewandowski, I think is safe to say, is a Trump-ite,” Foster said.

The most recent Montgomery County Democratic Party dinner was headlined by Rep. Hakeem Jeffries (D-NY), who Foster said provided a “very inspiring” message about different factions within the party uniting.

In 2016, Trump became the first Republican presidential candidate to carry Pennsylvania since 1988. Trump successfully flipped three counties in the state that previously voted for President Barack Obama twice, but did not see the same success in Montgomery County. Sec. Hillary Clinton bested Trump by 21 points in the Philly suburban county, while Obama carried the county over Gov. Mitt Romney by 14 points in 2012.

The VIP cocktail hour is set to begin at 5:30 pm. One ticket per person for the Fall Dinner costs $125, while it is $75 per committee person. A VIP and Dinner ticket, with photo and book signing opportunities available, costs $250.

Information about the event can be found here.