Could Trump Appeal to Southeast PA? 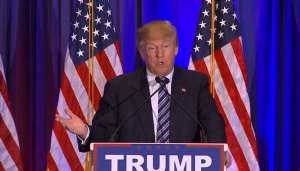 Could Donald Trump do well in Southeast Pennsylvania after all?

That’s the question asked by David Weigel of the Washington Post. It’s generally thought that PA is experiencing a growing east-west divide but Weigel found several people in Bucks County that are worried/excited that Trump could have a chance.

“I’d have been very confident if they’d nominated Sen. [Ted] Cruz because he would have done terribly in the Philadelphia suburbs,” said Rep. Brendan Boyle. “The question with Trump is, will he be able to get votes that your typical Republican, like Mitt Romney, couldn’t get? It’s a real X-factor.”

“I’ve never seen this much excitement in Pennsylvania in my life,” said Rep. Lou Barletta, who was an early supporter of Trump. “I can’t tell you how many people come up to me, say they haven’t voted in 20 or 30 years, and say they’re for Trump. Strong, Democrat[ic] areas, union members — they’re voting for Trump.”

“Will he have some appeal to working-class Dems in Levittown or Bristol? Sure,” Rendell said. “For every one he’ll lose 1½ , two Republican women. Trump’s comments like ‘You can’t be a 10 if you’re flat-chested,’ that’ll come back to haunt him.”

He then added, “There are probably more ugly women in America than attractive women.”

Without a hint of irony Rendell concluded, “People take that stuff personally.”

“There’s still a little frustration, a little racism in this world,” he stated while describing his plan to point holes in Trump’s appeal by asking exactly how the nominee plans to “Make America Great Again”.

“The novelty of Donald Trump will wear off, okay?”