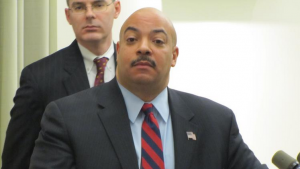 The shadows of Frank Fina, Marc Costanzo and Pat Blessington are going to hang over Philadelphia DA Seth Williams for as long as they stay on his staff…and possibly longer.

That’s the conclusion one reaches after Williams was hammered once again by members of the Philadelphia City Council about the employees’ behavior.

Fina, Costanzo and Blessington were part of the group exchanging lewd emails with government officials during their time in the Attorney General’s office. They went on to work for Williams in the Philly DA and despite the outcry, he has refused to fire them.

“I’m offended by these emails,” Councilwoman Cindy Bass said. “If somebody sends me something that I’m offended by, I will email them back and say, ‘Don’t send me this anymore.’”

“They did not stop the emails. They stand in a position where they have to make judgments, about whether cases are going to trial. They make decisions on peoples’ fates every single day,” she continued. “This is really about three individuals who work in the district attorney’s office right now on taxpayer dollars. I did expect that my district attorney would do something about it, and that it wouldn’t require meetings, press conferences, all these conversations over and over again.”

“I really hope that your office does not excuse behavior that is deemed offensive and shocking and off the charts,” Gym said. “They offend the sensibilities of every individual who operates in a functional society.”

Williams stood by the trio and his attempts to move past the controversy weren’t welcomed.

“They’ve had tremendous careers as public servants, have a tremendous body of experience, wealth of knowledge that we just can’t get by just jettisoning them off and hiring someone right out of law school,” Williams said.