It’s one of the most competitive congressional elections in the country, and with the launch Wednesday of Mark Crtiz’s new ad it’s becoming one of the most boilerplate. The spot contains familiar attacks over Medicare, as does Rothfus’s response.

It’s not Larry Maggi’s Medicare ad; rather, it’s a soft, straight-to-camera example of the “he’s a nice guy, we just disagree” genre. 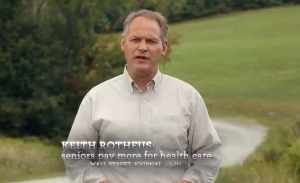 Over easy listening acoustic guitar music, Critz begins, “there are some things Keith Rothfus and I agree on. We’re both pro-life, pro-gun and pro-military. But we don’t agree on Medicare.”

He’s referring to Rothfus’s support for the House GOP budget, written by Rep. Paul Ryan (R-WI). He avoids a overreach common of Democrats and says, “Keith Rothfus wants to end the current Medicare system”. The budget would make Medicare more like a voucher program, but would not “end Medicare” as other critics have claimed.

However, he says, Rothfus wants to, “make seniors pay more for health care.”

That’s a tenuous claim. The budget’s authors vociferously note that their reform plan wouldn’t affect the benefits structure for current retirees or those 55 and older.

“Keith Rothfus does not want to make any changes to Medicare for our seniors and Congressman Critz knows that, but he continues to lie about Keith to save his political career, and the people of Southwestern Pennsylvania have had enough,” he said.

Critics of the Ryan plan say that changes made to the health care system by the Ryan plan would cause providers to shift prices and raise prices for current seniors, intentionally or not. Supporters of the plan, like Rothfus, note that Medicare will go bankrupt within a few years if serious reforms are not enacted, resulting in everyone’s benefits being cut.

That’s why Ryan’s plan keeps in place changes and reforms made to Medicare by the Affordable Care Act, aka Obamacare, to the tune of $716 billion in savings.

Which leads to team Rothfus’s tenuous claim about Critz, who has voted repeatedly against measures that would repeal Obamacare.

“Mr. Critz is the only one who used Medicare funding for something else, choosing to raid Medicare of $716 billion just to pay for Obamacare,” Raso said. “Keith Rothfus will repeal Obamacare and fight to save Medicare.”

In other PA-12 news, Critz also rolled out the endorsement Wednesday of the Alliance for Retired Americans, a group mainly comprised of former trade workers of the AFL-CIO.