Crossroads GPS, the conservative Super PAC founded by Karl Rove, is launching a nearly half a million dollar ad buy in Pennsylvania. Their television spot that hammers President Obama over broken promises, and comes as Mitt Romney endures a blistering ad assault here. 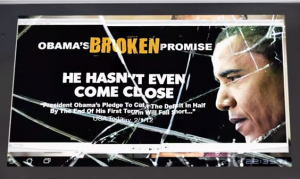 The 60-second spot comprises four vignettes of the President making a pledge or promise, rebutted by an announcer.

“Today, I’m pledging to cut the deficit we inherited by half by the end of my first term in office,” Obama said during a speech in February 2009.

“Broken. Because he hasn’t even come close,” the ad’s announcer responds. “We need solutions, not just promises.”

The group said in a press release that it will spend $487,000 in PA on network TV as part of a $25 million total buy also in Colorado, Florida, Iowa, Michigan, North Carolina, New Hampshire, Nevada, Ohio, and Virginia. The spot will run from May 17 to 31.

Update: The Democratic National Committee responded to the ad, saying it distorted Obama’s record and distracted from Mitt Romney’s.

“Karl Rove’s most recent deceptive ad can’t hide the reality that, unlike Mitt Romney, President Obama has proposed a plan to reduce our deficit by $4 trillion over the next decade while creating an economy built to last through investments in education, infrastructure, and research,” the release said. “Nor can it hide that, as promised, the President has cut taxes for every working American and cut taxes for small business 18 times, bringing federal taxes for middle class households near historic lows.”

The move comes as Republican presidential hopeful Mitt Romney faces a bevy of negative ads in PA. The Obama campaign is airing this 2-minute negative spot Wednesday only, while the pro-Obama Super PAC Priorities USA Action broadcasts a similarly hard-hitting 30-second spot for at least a week. Both commercials attack Romney over his past as a venture capitalist.

The Obama camp is running this positive ad in full rotation.

“President Obama made commitments on core issues to the American people, and this ad holds him to account,” said Steven Law, president of Crossroads GPS. “Our country faces serious economic and fiscal problems which require practical solutions and not just promises.  If we don’t hold Washington politicians accountable, we won’t fix these problems that are holding our country back.”