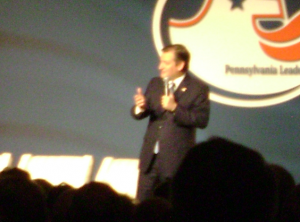 On Friday, Pennsylvania’s conservatives gathered in Harrisburg for the PA Leadership Conference.

Two of the party’s three presidential candidates, Ted Cruz and John Kasich, made an appearance in an attempt to win over the party faithful and take the commonwealth’s April 26th primary.

It would end up being quite the showcase of contrasts

His first statement was a complaint.

“Can we turn those lights down please?,” Kasich asked. “So I can see the people out here, is that possible? I can’t see any of you out here.”

After about thirty seconds of trying to speak from the stage, the irascible candidate walked off and stood in front of the stage among the front-row attendees instead. The Ohio Governor gave the rest of his speech and took questions from this position.

Of course while it was easier for him to see, the crowd couldn’t see him since he was out of the lights. This wasn’t a fortuitous sign for how the afternoon would go for the presidential hopeful.

Kasich proceeded to recount his own personal history while sprinkling in several mentions of former President Ronald Reagan.

It wasn’t long, though, before he showed why observers consider him the moderate in the race.

“Democrats love to spend,” he asserted. “So do Republicans, they just feel guilty when they do it.”

He went on to deliver implicit critiques of Donald Trump and Ted Cruz by denouncing religious tests and patrolling of neighborhoods before scolding them for being insincere.

“I mean, come on,” Kasich stated. “Let’s be real, I mean we can say these things, we can make all these statements but folks this is what I want you to think about. Do we want to play politics or do we want to help our country?”

From citing Roberto Clemente as his childhood hero to calling for more discussion about “what is right with America”, Kasich was doing a decent job of keeping the crowd engaged. Then he made a big mistake.

While talking about education reform, he threw in an aside about teachers.

“When we sit down with our teachers, who are the most unpaid people on the face of the Earth-,” he stated.

It’s quite a phenomenon to feel an entire room turn against a person and not especially easy to describe, but I’ll do my best.

A murmur swept through the room and took up any air John Kasich had left with this crowd. You could hear people muttering a disappointed and disapproving “No” to themselves. He had to reap that whirlwind a few minutes later when he took questions.

A woman in the crowd, who said she was a nurse, took issue with Kasich’s comments about teachers. When he stood behind his belief that teachers are underpaid he got into an argument with the questioner and defended the work of public servants.

“I’ll tell you what I’d love to do,” he stated in an attempt to segue. “I’d take from some of these athletes who make millions and millions of dollars and give it to the nurses and the teachers. OK? I mean, life is not always fair.”

A few moments later, he found himself in an argument with the crowd about Common Core with multiple members are the crowd shouting “Not true” when he tried to explain the program.

Recognizing the tense feelings in the room, Kasich tried to put on his best face.

“Well, anyway there’s a murmur in the crowd and I enjoy it,” he asserted at one point. Then, he made a comment almost to himself that illustrated the difficulty of that moment and his time at PLC in general.

Before the junior Senator from Texas even showed up there were Cruz signs in the crowd. Those only increased exponentially as his scheduled speaking time neared.

Families with young kids filed into the room in and had to stand because all the seats in the ballroom were filled. Police officers scanned the room and dogs were even used to sniff around the premises.

The impression was unmistakable that unlike all the other events so far, including Kasich’s appearance, this was a big deal.

Suffice to say, Ted Cruz’s reception was quite different from his opponent’s.

Introduced as “the real deal”, the candidate was met with “Cruz” chants and a “We love you, Ted!” as he took the stage.

The Senator was naturally comfortable on the stage (the lights didn’t bother him) and he had the audience from the very beginning.

Cruz then proceeded to take shots at his foes, which ran the gamut of the media to Donald Trump.

“It’s easy to talk about making America great again,” he joked. “You can even write that on a baseball cap.”

Just about every campaign pledge he made got a round of applause.

“Praise the lord!” an audience member shouted at one point.

Whereas the crowd mostly met Gov. Kasich with silence or protest, every sentence Cruz delivered seemed to get an affirmation. It was less like a political rally and more like a sermon for the faithful.

As a result, Cruz took this opportunity to take another shot at the one man ahead of him in the delegate count.

“Donald Trump has been supporting liberal Democrats for forty years,” Cruz jabbed. “I have no experience with that.”

When Cruz portrayed Trump as stating that compromise was necessary, the crowd booed.

He kept driving in on Trump, hitting him for his remark that he would be “neutral” in the Israeli-Palestinian conflict. This prompted another round of loud boos from the audience (although it got one “Woo!” as well).

“Let me be very, very clear, as President I will not be neutral,” Cruz declared. “America will stand unapologetically with the nation of Israel.”

Several times throughout the address, Cruz compared the present day to 1980. In his mind, Barack Obama is Jimmy Carter, he is Ronald Reagan and Islamic terrorism is communism.

The President’s trip to Cuba was castigated before Cruz once again went back to Trump.

“There are two candidates and only two candidates who have a path to winning this nomination: either me or Donald Trump,” the Senator stated to passionate boos at another mention of The Donald.

“We are looking at a Walter Mondale-level bloodbath” Cruz contended if Trump is nominated while citing a recent poll showing the businessman trailing Hillary Clinton in Utah.

“Nominating Donald Trump would be a trainwreck and that’s an insult to trainwrecks.”

The atmosphere built toward a fever pitch towards the end.

“We’re getting you in there Cruz!” one man shouted.

By the time he delivered the politician’s obligatory closing (“God Bless you and God Bless America!”) you could barely even hear him over the ovation.

It wasn’t a shock then when the next day it was announced Cruz had won the PLC straw poll with 64.6%. Trump finished second at 13.6% with Kasich just behind at 13.3%.

The question remains, though, were these people just Cruz’s base or a signal that the Texan is gaining momentum in Pennsylvania? We’ll find out on April 26th.