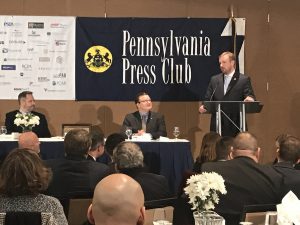 HARRISBURG- After Speaker Mike Turzai announced that he was retiring from the state House one month ago, chatter immediately began about who would be at the helm of the chamber in the upcoming session. While House Majority Leader Bryan Cutler (R-Lancaster), whose name has been floated as a possible successor, seemingly didn’t want to delve into this discussion much at the Pennsylvania Press Club on Monday afternoon, he did indeed address the elephant in the room twice during his half hour appearance, once during his speech and once during the Q&A portion.

“I’m focused on my job right now, that’s what I’m doing, that’s what I was elected to do and if and when that time comes, it’s one that I’ll certainly entertain,” Cutler said at the conclusion of the Q&A portion of the luncheon when he was asked a “yes or no” question about whether he’d seek the position.

During his speech, Cutler said that their roles in Harrisburg are remaining “exactly the same” since Turzai announced he would not seek another term and that the conversation of House leadership wasn’t mentioned once during two recent town hall meetings in his district.

“I can tell you at two recent town hall meetings in the 100th District, two different locations, I received a grand total of zero questions from my constituents about who was going to be the next Speaker,” Cutler said. “They asked about job training, workforce development, they asked about educational opportunities, property taxes, and environmental permitting.”

Cutler, who mainly touted the bipartisan achievements of the House on Monday afternoon, also briefly discussed the coverage of the race and how he views the caucus.

While he attempted to avoid that conversation, Cutler was much more willing to discuss the legislative achievements of the House over the past year.

“I would gladly stack our numbers against anyone’s,” Cutler said while talking about the volume of bills passed since he started serving as majority leader 14 months ago. “When you looked at last sessions totals, 93% of the bills we passed were bipartisan, 68% were unanimous.”

The Lancaster County Republican serving in his seventh term in the state House described the past year as the “most successful start to the legislative cycle in the last three decades” adding that they have experienced a 20% increase in bills passed in comparison to this point in the previous session.

Cutler said that the state legislature has addressed major reforms during this current session. During his 15 minute speech, Cutler specifically cited voting reforms that he believes will make next election the “most accessible in our state’s history,” reforms to child sexual abuse laws which he said ensure that there is a “pathway to holding their abusers accountable,” investments in education, addressing human trafficking, and more.

While he said despite living in what he sees as a “divided time,” that the state legislature deserves credit for working on various issues that matter across the commonwealth and pointed to recent polling that said “60% of Pennsylvanians believe that the state is currently on the right path.”

“You can’t pass roughly 400 bills by not working together,” Cutler said.

During the 15 minute Q&A, Cutler also answered a variety of questions pertaining to the state legislature that included his differences with Gov. Tom Wolf’s budget proposal, thoughts on the state Supreme Court, to saying he would join President Donald Trump at a rally if he was asked to do so.

At the end of the event, it was announced that David Thornburgh, president and CEO of the Committee of Seventy, will participate in the next PA Press Club luncheon on March 30.