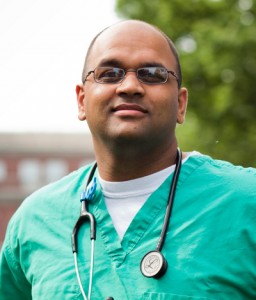 The liberal website Daily Kos has added Manan Trivedi, congressional challenger in PA-06, to their selective “Orange to Blue” fundraising list. This is round two of the battle, which began in 2010, between Trivedi and Republican incumbent Rep. Jim Gerlach. Trivedi also made his way onto the Orange to Blue list during that initial, unsuccessful run for Congress.

Announcing the endorsement, Daily Kos contributing writer and self-reported friend of Trivedi, Adam Bonin, has called the District 6 candidate a “wonk” (more or less, a person who knows their stuff), “a solid voice for a better agenda,” and quite simply, “a good man.”

Bonin explained Daily Kos’s continued support of Trivedi writing that in 2010 “he ran with rare courage, even for progressive Democrats, as the only major House candidate last cycle willing to stand up for the Affordable Care Act when its legislative fate was iffy.”

“He believes the right things … He supports Medicare-for-All, comprehensive immigration reform, and stated flatly that ‘I support the right of all Americans to organize and bargain collectively without intimidation or fear of retribution.’ … He cares about getting policy right, and will work hard to do so,” wrote Bonin.

Daily Kos is a liberal blog with broad national influence. It introduced an ActBlue fundraising page for its Orange to Blue List in 2008 to back “progressive” Democrats around the country. The list is compiled with regards to the mantra “More Democrats, Better Democrats.”

In 2008, Orange to Blue candidates split $2.4 million. Two years later, in 2010 the group raised over a million bucks to be divided amongst a dozen candidates including Trivedi. Now, the website is backing eight candidates from across the continental U.S. They have raised $95,385 so far.

Though Trivedi is unabashed about his Democratic views, it is pertinent to wonder how much the backing of ideological supporters like Daily Kos and the netroots is likely to help him, given the slightly Republican lean to his district.

Trivedi Senior Advisor Daren Berringer characterized the endorsement as just one of many.

“With each and every endorsement, we see it as a continuation of Manan’s ability to build a broad coalition in finding consensus solutions that work for the community as a whole,” he said.

“When Manan was a battalion surgeon in Iraq, he didn’t ask where on the political spectrum the Sailors and Marines he served with stood. He just worked with everyone to complete the mission.”