Dangerous to Be A Democrat in Rural PA 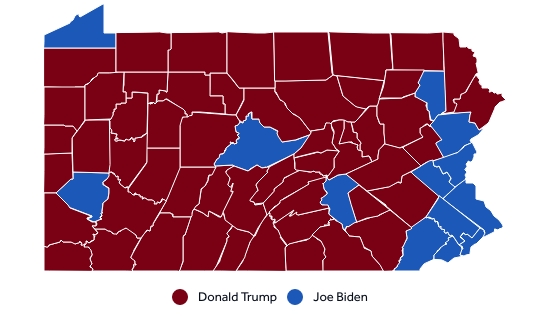 “The hatred for Democrats is just unbelievable.”

When asked for a political affiliation, one business owner said, “I would rather not say, just because it’s a small town.”

When did it become dangerous to be a Democrat in rural Pennsylvania?

Democrats have lost votes in virtually every election since 2008. Now they are feeling ostracized with few options available to reverse a cultural trend.

To no one’s surprise, Dems outnumber Republicans in Philadelphia, Allegheny and the southeast “collar” counties in the latest Department of State voter registration figures. Also no surprise is that most of the remainder of the Keystone State leans … no, almost falls over to the GOP side.

Seven rural counties – Fulton, Potter, Bedford, Juniata, Perry, Tioga and Snyder – have three times more GOP registered voters than Democrats. Republicans double up Dems in 18 other counties – of those, only Franklin and Blair counties have more than 75,000 voters. The GOP has a 300,000 registration edge in these 25 counties.

Democrats have a 950,000 advantage in Allegheny and Philadelphia counties alone. Fayette County (79,000) is the smallest county and is one of 17 in the state with a Democratic registration lead.

Small-town Pennsylvania has almost always been rooted in conservative politics. Democrats are used to being outnumbered by the local GOP majority. But more and more, Dems are feeling isolated and unwelcome in their own communities.

According to the Associated Press, the Democratic party brand has become toxic in the small towns of the northwest corner of the state. Some have removed bumper stickers from their cars, yard signs from the lawns and refuse to publicly acknowledge their affiliation.

“The hatred for Democrats is just unbelievable,” said Tim Holohan, an accountant based in rural McKean County. “I feel like we’re on the run.”

“You have to be careful around here,” said Barbara Speer, 68, a retired sixth grade teacher.

“It’s hard to sink lower than we are right now,” said Rep. Jim Cooper (Tenn.-D) who recently announced he would not seek reelection this fall. “You’re almost automatically a pariah in rural areas if you have a D after your name.”

The shifting climate has many Democrats scratching their heads about the party strategy to cater to voters in more populated urban and suburban centers.

One candidate that challenges the norm is John Fetterman. Pennsylvania’s lieutenant general is running for the U.S. Senate seat and, as a former small-town mayor, insists Democrats can no longer afford to ignore rural voters.

“These are the kind of places that matter just as much as any other place,” he said to a group inside a bingo hall in McKean County, according to the AP.

Fetterman’s outreach is appreciated, but voters realize that it will take more than him to impact change.