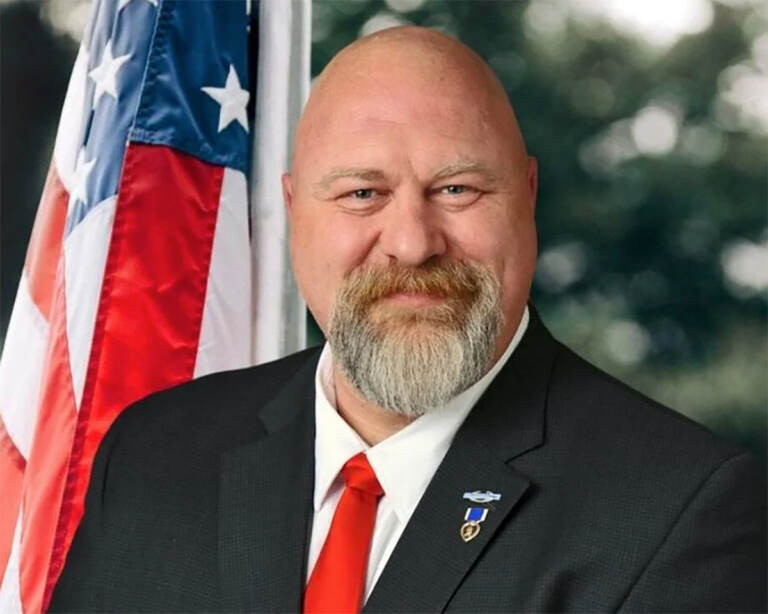 Teddy Daniels, Republican candidate for lieutenant governor, has been ordered to stay away from his home after his wife obtained a protective order citing claims of physical and mental abuse, according to Rolling Stone magazine.

The 6-4, 360-pound Daniels was accused of making threats, saying he would kill the family dog and grabbing his wife by her shirt.

Daniels’ wife told authorities that he had “numerous” guns and knives in the house and that she is “afraid of him and what he will do to me.” She also told a Pennsylvania judge that Daniels stalked her at work, “screaming at me, making me cry” and that he regularly cursed at her and threatened to throw her out of the house.

The three-page petition requesting the protective order stated that Daniels is “always angry with [the wife] and has threatened to kick her and her 4-year-old son out of the house if he loses the campaign. In addition to verbal abuse at both, he is accused of preventing her from seeing her family and said she could not attend a family funeral.

Daniels’ campaign manager called her a dozen times trying to talk her out of filing for the PFA, the wife wrote.

“He (the campaign manager) has threatened to investigate who made wellness calls to the state police unless I dropped the emergency PFA and didn’t file (for) a temporary PFA,” she told the Times-Tribune.

Wayne County President Judge Janine Edwards granted the temporary PFA on Tuesday. Under the order, Daniels was removed from his home in the Poconos and forbidden from having any contact with her. The judge also gave Daniels’ wife temporary custody of their child and ordered Daniels to turn over his guns.

Edwards set May 6 at 9 a.m. for a hearing on whether to continue the temporary order. She said Daniels can go to their Lake Twp. home, accompanied by state police, to retrieve his personal belongings.

Daniels, one of nine candidates for the lieutenant governor nomination, is running with the endorsement of state senator Doug Mastriano, who is a candidate for governor for the GOP.

In response to the accusations, Daniels, 47, vowed to stay in the race and claimed that he was the target of “political terrorism” meant to damage his campaign.

He also complained repeatedly about Rolling Stone contacting people for its reporting about him, a standard practice in journalism. Rolling Stone in February reported on other domestic abuse allegations stemming from two prior relationships he had with women.

The Associated Press reports that Rolling Stone editor-in-chief, Noah Shachtman, responded in an email that “We stand by our story.”

Earlier this month, Daniels had a run-in with fellow candidate Russ Diamond (R-Lebanon) who raised questions about his law enforcement background, disability status and family life.

“I’m curious to see what you’re going to do with a man standing in front of you, now that you want to bring my wife into things,” Daniels warned Diamond via Facebook. “You are the lowest, scummiest, dirtiest form of a thing on the face of the earth. And boy you poked the wrong bear.”