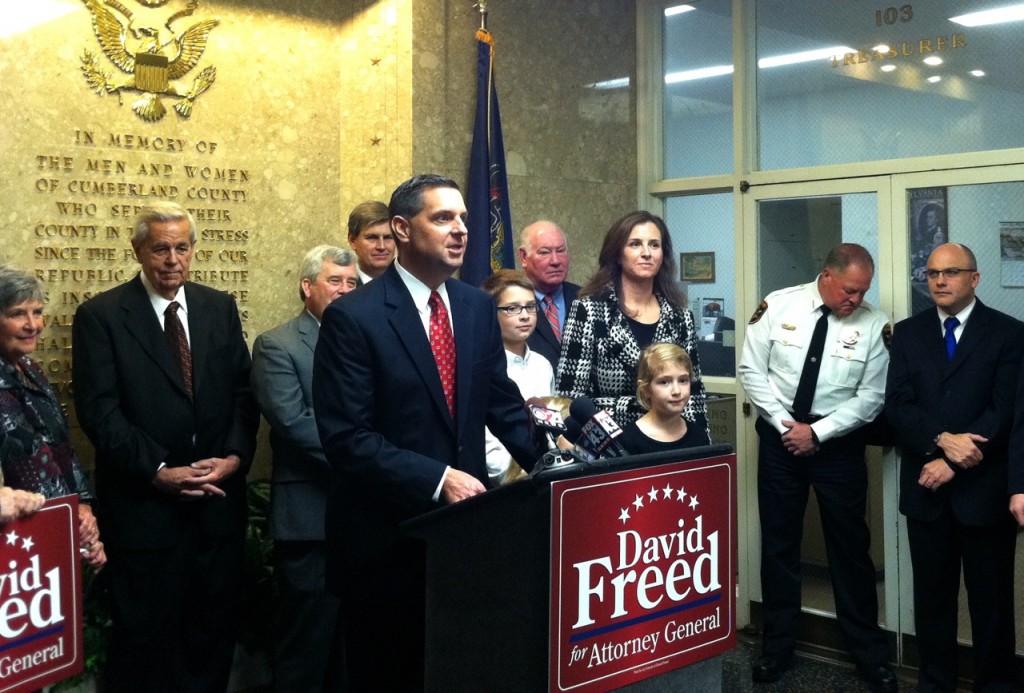 Carlisle — In the crowded lobby of the Cumberland County courthouse, District Attorney Dave Freed launched his bid for Pa. Attorney General Tuesday afternoon. He repeatedly emphasized his record as a tough-on-crime prosecutor.

Freed was flanked by several of his colleagues – District Attorney James Martin of Lehigh County; Tom Kearney of York County; and Shawn Wagner of Adams County – and introduced by Ed Marisco of Dauphin County. His website boasts the endorsements of 20 Republican DAs from across the state.

He joins Pa. Senator John Rafferty (R-Montgomery), the only other declared Republican candidate.

Update: Washington County DA Steve Toprani, who had been considering an AG run, told PoliticsPA he is “enthusiastically supporting Freed.”

“Pennsylvanians want an Attorney General who is a practicing prosecutor,” Freed said. “They want a top law enforcement officer who has the experience to hit the ground running. And Pennsylvanians want a leader in the office who can navigate the need to be tough on crime, and smart on crime at the same time.”

He also said he would fight the implementation of the health care law. Freed has served in the DA’s office since 1998 and as DA since 2006.

He also presents a possible conflict for Freed who, as AG, might be charged with overseeing a probe of Hershey charities – where Zimmerman served until recently. The Pa Democrats whacked Freed on the subject in a statement.

“David Freed is already bringing with him concerns of conflicts of interest before his campaign even begins. Pennsylvanians need to trust that their Attorney General will stand up for them, not special interests or their own self-interest,” said Pennsylvania Democratic spokesperson Lindsay Fritchman.

Freed said he would not participate in an investigation of his father in-law, and would instead assign a special, independent prosecutor to do the job.

“I know the work of the charitable trust section – I don’t believe anything will still be ongoing when I would take over,” he added.

Path to the Nomination

PoliticsPA has called Rafferty the front runner in the AG race. However, there is a path to the nomination for Freed, whose current position gives him a strong claim as the law and order candidate.

If the state’s Republican DAs coalesce around Freed – a real possibility – he’ll have support from a statewide network of politicos who typically have the highest favorability of any local officials.

“I think prosecutors are key, and geographically central Pennsylvania is key,” said Marsico. “Senator Rafferty has a record that he will run on as a legislator, but Dave’s got a record as a prosecutor.”

Republican state committee will be key; Freed repeatedly emphasized outreach to committee members during his speech and an interview afterward. He’s hosting a conference call with them later Tuesday night. While he didn’t rule out a run against an endorsed candidate in Carlisle on Tuesday, he did say it was unlikely (he was more definitive in an earlier interview with John Micek of the Morning Call).

“I’d have a hard time running against an endorsement,” he said.

As GOP state committee members prepare for their January 28th endorsement meeting, regional caucuses around the state will meet and hold straw poll votes to see who they support for statewide offices. The votes are not binding, but help on-the-fence committee people see which candidates have the broadest support from their peers. The first such vote is the Central Caucus, where Freed’s Cumberland County allies have a loud voice. A decisive win in his backyard could help him gain momentum for an endorsement.

He has another intangible benefit not talked about by Freed, his supporters or his campaign team – but whispered about in GOP circles: his family. Freed’s wife (herself with prosecutorial experience) and three children are photogenic and will look great on campaign literature. Rafferty, 58, is a bachelor.

That all said, it will be a fight for Freed. Rafferty has the support of his colleagues in the Pa. Senate as well as some of the major players in southeast Pa. GOP circles (aka Bob Asher). Freed’s cash on hand, $50,000, is about half that of the Senator.