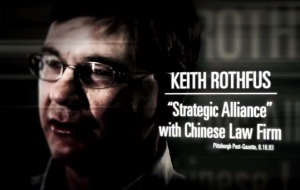 A new attack ad from the Democratic Congressional Campaign Committee highlights a 1993 business decision made by an employer of congressional hopeful Keith Rothfus.

“Keith Rothfus worked for a law firm that had a ‘strategic alliance’ with a Chinese firm,” charges the ad’s announcer. “Maybe that’s why he signed a pledge that protects tax breaks for companies that ship jobs overseas.”

The thirty second spot features several snippets of angry man-on-the-street style remarks from people about Rothfus. The Allegheny County attorney faces Rep. Mark Critz (D-Cambria) in what is expected to be the top congressional contest in PA this year.

The DCCC’s ad cites a August 1993 report from the Pittsburgh Post-Gazette, which included just two sentences on the matter: “The law firm of Eckert Seamans Cherin & Mellott has formed a strategic alliance with Beijing No. 6 Law Office of the People’s Republic of China. The two firms will refer clients to each other and exchange visits and legal materials.”

Rothfus, who had recently graduated from law school, was an associate at the firm from 1990 to 1993. He left within weeks of the announcement of the “strategic alliance”.

“The Critz campaign and his liberal colleagues in Washington would have you believe that because Rothfus worked for a law firm that partnered with another law firm overseas, 20 years ago, when he was a young 28-year-old associate straight out of law school, that means he wants to harm the middle class,” said Rothfus Campaign Manager Jon Raso. He called the ad a “desperate” attempt to change the subject from Friday’s jobs report, which showed unemployment at 8.1 percent.

“Talk about absurd and outrageous, Mark Critz is the Congressman and jobs are being outsourced on his watch,” said NRCC spokesman Nat Sillin. “Facts are facts and Mark Critz is the only candidate in this race who voted for big-government spending that results in trillion dollar deficits and America borrowing hundreds of billions of dollars from China.”

While the law firm angle isn’t particularly strong, the underlying basis for the China criticism is more solid. The Americans for Tax Reform Taxpayer Protection Pledge, which Rothfus signed, is a promise to oppose any tax increases, even on companies that “ship jobs overseas.”

Grover Norquist, president of Americans for Tax Reform, said he applauds Rothfus for signing the pledge and that it mirrors taxpayers’ feelings over “tax-and-spend” policies – policies the DCCC throws their weight behind.

“The most recent false claims by this group further demonstrates the difficult time national Democrats are going to have defending the Democrat ‘plan’ for economic recovery: higher taxes and more government spending.”

This praise could help Rothfus with fundraising, too.

That part of the ad echoes part of a similar spot released earlier this week by SEIU. That 30 second spot targeted Rothfus on the overseas job claim, too.

Critz has been a vocal critic of Chinese monetary policy, as well as U.S. trade policies, which he says hurt the manufacturing sector in the 12th district and elsewhere.