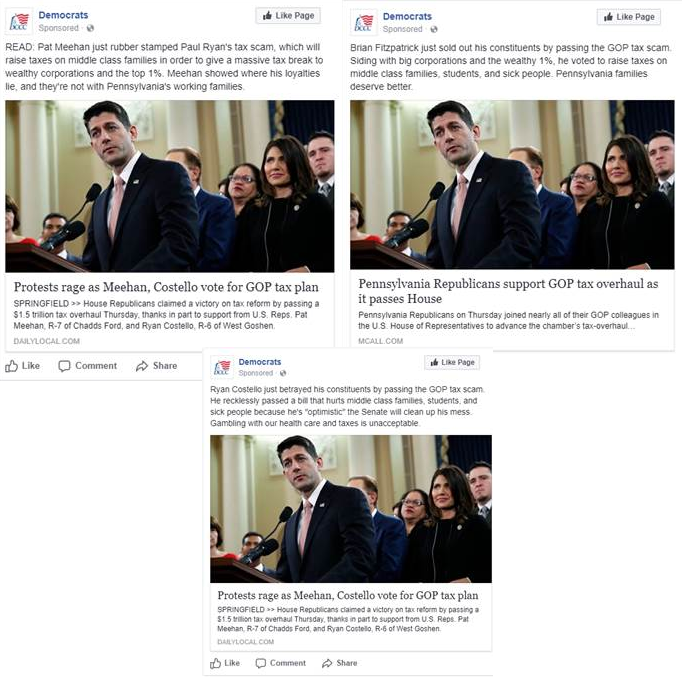 The Democratic Congressional Campaign Committee (DCCC) launched a new ad digital ad campaign targeting Congressmen Ryan Costello, Brian Fitzpatrick, and Pat Meehan over the GOP’s tax plan, and a new microsite calling for people to record videos over why they oppose the tax plan.  Save My Care launched a digital video ad against Costello as part of a national ad buy.

The DCCC’s ads will be running on Facebook, Twitter, and Instagram through the end of November directing people to local news stories about the tax plan’s passage, with messages saying the Congressmen “sold out his constituents” and that he “voted to raise taxes on middle class families, students, and sick people.”

“The Republican Tax Scam is nothing more than huge tax cuts for the rich and big corporations, paid for by tax increases on millions of middle-class families,” DCCC spokesman Evan Lukaske said in a statement.

The DCCC’s microsite, TaxCutsAndJobsAct.com, directs people to “record a quick video and tell us why you oppose Paul Ryan and Donald Trump’s atrocious tax scam.”  The DCCC will be pushing the website on google search ads.  In the show of how important buying URLs can be, the DCCC bought a slate of URLs that otherwise would likely be used by Republicans to push the tax plan.

The NRCC went on the offensive against the ads in a statement to PoliticsPA.

“Nancy Pelosi and Washington Democrats are dusting off the old playbook by repeating debunked lies and hoping someone believes them,” NRCC spokesman Chris Martin said.

Save My Care’s ad pushes how the bill reportedly will pull back a tax deduction for people with high medical expenses and cuts medicare costs.  The buy is reportedly in the five-figures and is targeted at 14 House Republicans, including Costello.

Costello’s campaign responded to the ad going on the offensive against Costello’s likely opponent next year Chrissy Houlahan, tying her to House Minority Leader Nancy Pelosi, and bringing up a report tying Houlahan’s former company to sweatshops.

“It’s not surprising that Greedy Chrissy Houlahan has Nancy Pelosi’s special interest friends defending her support for tax increases. No one takes Chrissy Houlahan seriously on tax reform, after all she has a history of feeding workers pig slop and paying workers just 35 cents an hour.  Ryan is working to bring tax relief to hardworking families in Southeastern Pennsylvania,” Costello Spokeswoman Andrea Bozek said.