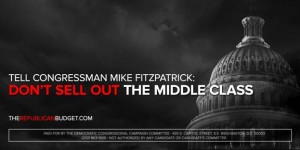 The campaign, entitled “Battleground: Middle Class,” will be broadcast nationwide, with the first phase acting as an attention-getter for Pennsylvania voters. The aim of the project is convince Pennsylvanian citizens that Fitzpatrick is abandoning the middle class to cater to the wealthy, according to the DCCC.

Fitzpatrick and House Republicans released the budget on Tuesday, and the DCCC highlighted several aspects that they felt were causes for concern. These include raising the taxes of middle class families, making Medicare a voucher program, ending the Medicare guarantee for seniors, and allegedly costing the economy 1.1 million jobs. The budget also grants tax breaks to corporations, some of which may ship jobs overseas.

The project will reach voters in various ways. Among them are paid advertising online, efforts to connect voters to their representatives, and field canvassing efforts.

The budget has already garnered national backlash, with everyone from the AARP to The New York Times denouncing its contents. Ian Prior, Northeast Regional Press Secretary for the National Republican Congressional Committee, defended Fitzpatrick:

“Mike Fitzpatrick has actually passed laws that restore pension cost-of-living adjustments for military veterans and protect seniors from predatory lending tactics. Meanwhile the DCCC is adding another episode to its amateurish fiction film collection to distract from the fact that Fitzpatrick’s two opponents are trying to out-liberal each other on their support for Obamacare and economic programs concocted in the 1970’s that drastically increases the cost of living on middle class families.”

The DCCC also has a horse in this race: Kevin Strouse, who they endorsed in a run against Fitzpatrick. But Strouse will first have to win a Democratic primary against Shaughnessy Naughton.