DCCC Pulls Out of PA-6 and PA-8 Races 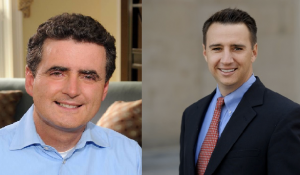 The DCCC is moving out of the Keystone State.

According to a report from Alex Isenstadt of Politico, the Democratic Congressional Campaign Committee (DCCC) is canceling its planned TV advertising in Pennsylvania’s Sixth and Eighth Districts.

It’s all part of a plan, which typically takes place every October, to narrow the organization’s target list in order to protect as many incumbents as possible.

“In the face of millions of dollars from outside Republican groups aggressively pouring into our races, House Democrats are fortifying our vulnerable incumbents and focusing in on top-tier competitive races,” DCCC spokeswoman Emily Bittner told Politico.

Democratic nominees Manan Trivedi and Kevin Strouse are victims of this defensive shift.

“As part of the plan, Democrats will cancel planned TV advertising in a group of districts held by Republican lawmakers, all of which are now considered essentially out of reach,” Isenstadt writes. “They include the suburban Philadelphia districts held by Rep. Mike Fitzpatrick and retiring Rep. Jim Gerlach, the California districts of Reps. Jeff Denham and David Valadao, and the Illinois district of Rep. Rodney Davis.”

Last week, it was announced that House Majority PAC was pulling back from their planned spending for Manan Trivedi in the PA-6 race. The contest was also downgraded by the Rothenberg Political Report. Trivedi has at least fared better than PA-8 Democratic nominee Kevin Strouse, whose raced has been called safely Republican by multiple political prognosticators.

Strouse, however, is still running TV ads and Trivedi believes he will still prevail.

“While our opponent has run ads funded by nearly a million dollars in special interest money, our campaign is fueled by the grassroots volunteers and strong community support necessary to win in November,” Trivedi spokesman Daren Berringer said.

Update: Jack Fitzpatrick of the National Journal also wrote about the DCCC’s action. His comments on PA-6 and PA-8 are included below:

Pennsylvania 6th and 8th Districts: The committee is cutting a week’s reservations in Philadelphia supporting physician and veteran Manan Trivedi, who has fallen behind Republican Chester County Commissioner Ryan Costello in the race for retiring Rep. Jim Gerlach’s seat; and Army veteran Kevin Strouse has failed to make an impact in his challenge against Republican Rep. Mike Fitzpatrick.

Update 2: Will Block of the Strouse campaign gave the following statement to PoliticsPA:

“Smart, competitive campaigns like ours don’t rely on outside spending and that’s why we’ve been on TV for weeks and have been running an aggressive campaign contrasting Kevin’s service to the country with Congressman Fitzpatrick’s support of Tom Corbett’s fracking policies and backwards views on women’s issues. While the Congressman refuses to hold public meetings with his constituents, voters have a chance to meet Strouse in person tomorrow night, as he’s the only candidate in this race who respects the people of the 8th District enough to attend public town halls.”