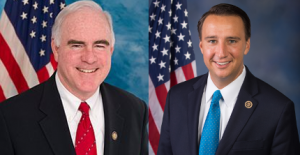 The Democratic Congressional Campaign Committee (DCCC) started its messaging campaign against its targeted seats in Pennsylvania.  The DCCC is using the American Health Care Act (AHCA) as the driving force behind its messaging.

The DCCC is looking to unseat four Republicans, all in the southeast.

Much like Republicans did with the Affordable Care Act (ACA), the DCCC is looking to highlight negative effects of the proposed bill.  Democrats argue public opinion is swinging in favor in the ACA and are trying to build on it to message against the AHCA.

They have started their messaging against Congressmen Pat Meehan and Ryan Costello, who both cast votes on the AHCA.

“This is a boardroom bailout that makes health care more expensive and less accessible for Americans and now Costello owns this debacle until Election Day,” DCCC spokesman Evan Lukaske said in a statement.

Republicans are pushing back against the DCCC’s messaging.

“It’s clear that Washington Democrats haven’t learned their lesson by going back to the failed pro-Obamacare rhetoric that has left them with just 5 seats out of a possible 18 in the Keystone State,” NRCC spokesman Chris Pack said in an email.