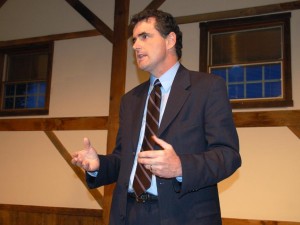 Reps. Charlie Dent (R-Lehigh), Mike Fitzpatrick (R-Bucks) and Mike Kelly (R-Butler) did not serve on the 12-member committee charged with narrowing the national deficit by $1.2 trillion, but Democrats accuse their party leadership of sabotaging the group’s efforts.

“The Super Committee failed because Republicans insisted on extending the Bush tax breaks for millionaires and refusing to include a jobs proposal,” the call says, “while ending the Medicare guarantee!”

National polling since the group failed to meet its November 23rd deadline indicates that both parties are taking heat for the collapse, with Republicans getting slightly more.

The DCCC’s effort in Pa. will include live phone calls, robocalls, and online advertising that will be aired in all of the districts.

The call also asks listeners to call their congressman and advocate for an extension of the payroll tax – but a tad too late. Last night, they each voted against a measure to do that. Republicans by and large have said that they support a payroll tax cut, just not that payroll tax cut.

“Democrats are the only party in Washington who cut $500 billion from Medicare to pay for their government healthcare takeover,” said Paul Lindsay, NRCC Communications Director in a statement. “No matter how hard they try, they will never be able to escape the wrath of voters on this issue or on their job-killing agenda that has made a bad economy even worse.”

The script of the robocall to be run in Rep. Mike Fitzpatrick’s district (all three scripts are the same) is as follows:

Hi, this is Lauren calling on behalf of the Democratic Congressional Campaign Committee calling about Congressman Mike Fitzpatrick and Republicans forcing the Super Committee to fail.

Americans demanded a bipartisan, big, bold, and balanced plan to reduce the deficit and grow our economy – but that’s not what we got.  The Super Committee failed because Republicans insisted on extending the Bush tax breaks for millionaires and refusing to include a jobs proposal – while ending the Medicare guarantee!  That’s something that Democrats stand strongly against.

By rejecting a balanced approach, Republicans chose to protect the wealthiest one percent at the expense of seniors and the middle class. Now they’re even talking about raising the payroll tax.