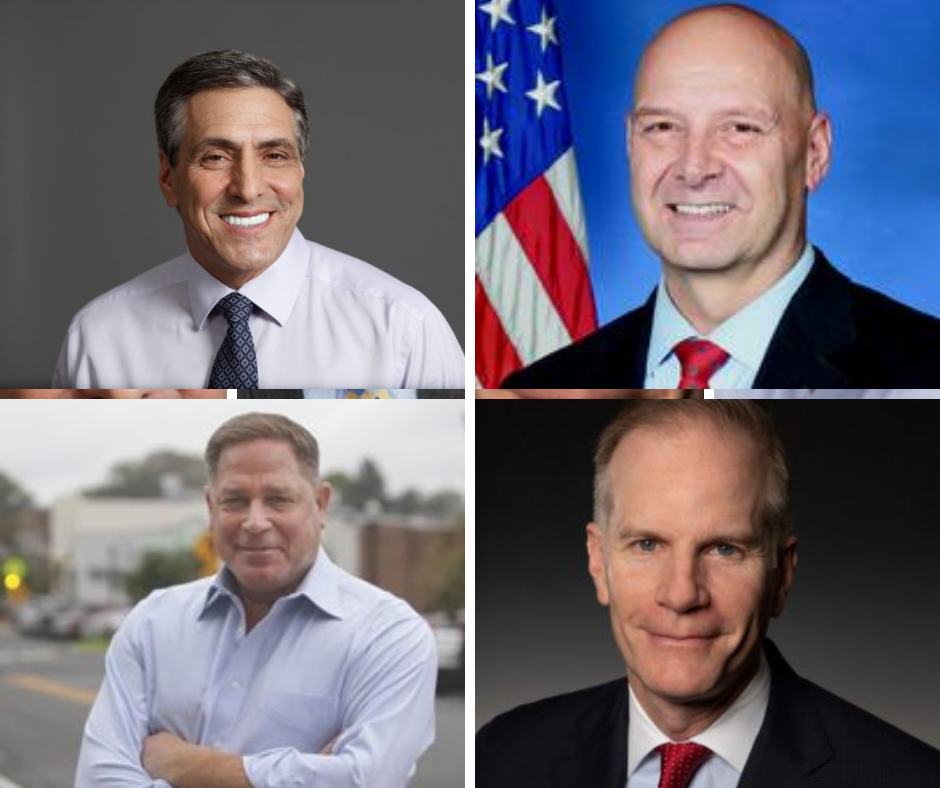 The leading candidates for the Republican nomination for Governor will meet tonight in Harrisburg for their first prime-time debate.

Lou Barletta, Doug Mastriano, Bill McSwain and Dave White will convene at the studios of abc27 at 8 p.m. for a 60-minute debate in a similar style previously used in debates for the GOP and Democratic candidates for U.S. Senate.

Nexstar Media Group – sponsor of the debate – set the eligibility criteria for candidates to participate. Jake Corman, Joe Gale, Charlie Gerow, Melissa Hart and Nche Zama were not invited. Candidates who received at least five percent in either of the last two Nexstar/Emerson College polls were included.

Dennis Owens of abc27 and Lisa Sylvester of WPXI will handle the moderator responsibilities.

The candidates will be asked for their views on the infrastructure, the economy, foreign policy, and other important topics impacting Pennsylvania.

In the most recent Emerson College poll, Barletta, former mayor of Hazleton, topped the list at 19.8 percent, while Mastriano, a state senator from Franklin County, was right on his heels at 19.4 percent. White, a Delaware County businessman and McSwain, a former U.S. Attorney, registered 11.6 and 7.9 percent, respectively. 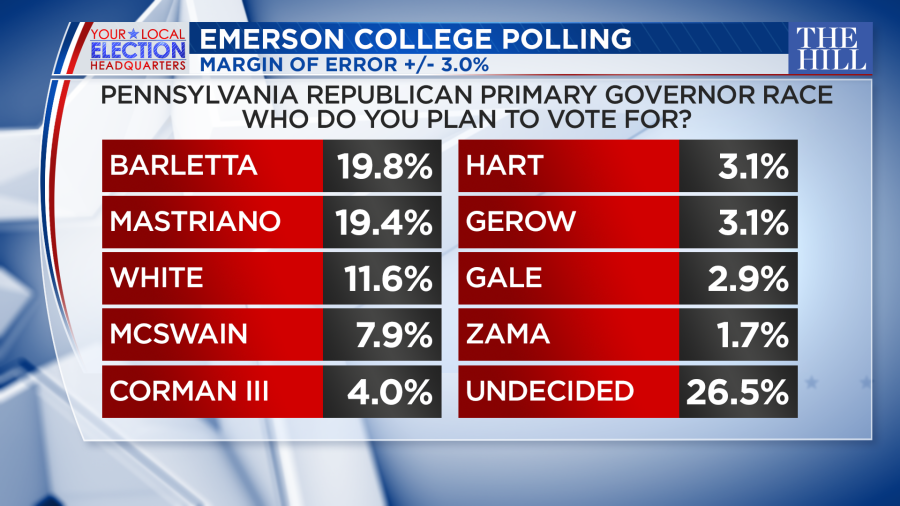 The stakes are high, as a plurality of voters remain undecided. Tonight could be one of the candidates’ last opportunities to make their case to this voting block.

The quartet was on stage together at the Pennsylvania Leadership Conference earlier in the month but the format did not provide much opportunity for the candidates to challenge each other’s positions on issues. Tonight will be different.

The biggest question in this primary – who will former president Donald Trump endorse? That is, if he will endorse at all?

“President Trump’s endorsement plays a big role in the election and who can win the primary,” said Barletta. “I know President Trump well enough to not speak for him or what he will or won’t do. That’s totally his call. We are just going to do the best we can to try and win this because it’s very important that we beat Josh Shapiro in November,” Barletta said.

Trump, while not placing his thumb on the scale at this date, has given an “anti-endorsement” with his call for supporters not to vote for McSwain.

Mastriano has been a controversial figure in the fight over the 2020 election results. A public and active supporter of the 45th president, he has also been in the media for his sponsorship of buses to the U.S. Capitol on January 6, 2021. Mastriano is second among the foursome in cash on hand at $1.09 million entering the second quarter of 2022.

Barletta and Mastriano have both positioned themselves to be the “America First” candidate for the GOP. Barletta was one of the first politicians to support Trump dating to 2016.

White is trailing in recent polls but has spent over $4 million to get his name out around the Commonwealth. He has been vocal about his contempt for the Wolf administration and its policies.

McSwain leads the group in cash on hand at $1.6 million and has the support of the deep-pocketed Commonwealth Partners, whose PACs are bankrolled by Jeffrey Yass, one of the top 10 richest people in the country. How will he respond to the inevitable calls that he did little to investigate Trump’s claims of widespread election fraud in 2020? And what will he have to tell citizens of Pennsylvania about the Trump “anti-endorsement”?

Other topics that will most likely be touched upon include Act 77, privacy rights, critical race theory and other culture war issues.