Debate Recap: What Did We Just See? 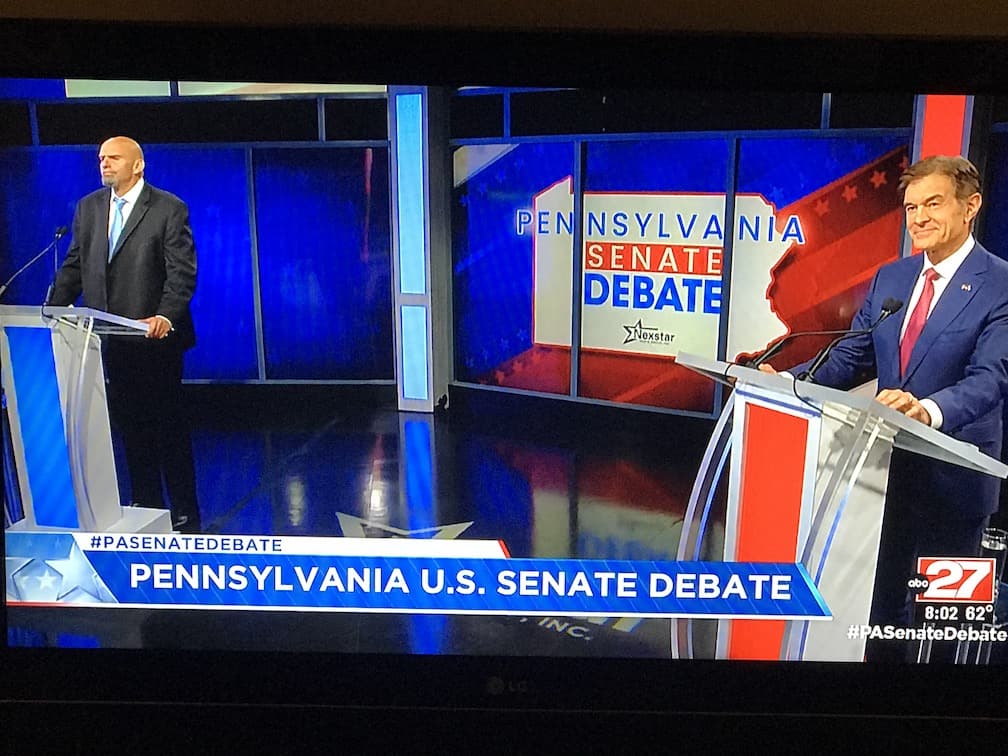 And what it all means.

Viewers saw the struggles that Fetterman had with the effects of his stroke. The lieutenant governor had difficulties piecing together his thoughts into coherent sentences. The halting nature of his responses, along with the lack of substance, gave room for doubt as to his overall health and ability to serve in the Senate.

“The most painful political debate I have ever watched,” said political consultant Chris Nicholas. “It was difficult for a regular undecided voter to get past Fetterman’s impediments to even analyze the content of his comments.”

On the flip side, viewers heard Oz speed through many well-rehearsed talking points that always ended with a glancing blow at his opponent. The celebrity doctor would address the question briefly, then pivot to what he wanted to talk about – mostly attacking Fetterman.

“Well, Fetterman did stumble,” said political commentator Terry Madonna. “He was not always clear. His answers were brief and not complete. Oz did not attack his health. He was more specific. The evening was replete with constant attacks.”

Fetterman appeared to be able to follow the questioning from moderators Dennis Owens of WHTM and Lisa Sylvester of WPXI, but had difficulties articulating his answers and occasionally mixed up his choice of words.

At one juncture, he was asked to explain his previous opposition to fracking – an industry he now says he supports.

Oz attempted to make his move down the center lane politically but often times did not provide an answer to the moderator’s questions.

He said that a $15 minimum wage was not high enough but followed by stating that it would drive small businesses to close. Oz declined to say if he would have supported a bipartisan gun safety law signed this summer and dodged a direct answer three times on whether he would have voted for Lindsey Graham’s national abortion bill.

“I want women, doctors, local political leaders letting the democracy that’s always allowed our nation to thrive to put the best ideas forward so states can decide for themselves,” Oz said.

“If you believe that the choice for abortion belongs between you and your doctor, that’s what I fight for,” Fetterman said. “Roe v. Wade, for me, should be the law.”

Both candidates were asked about their support of the 2020 presidential candidates, should they have a rematch in 2024.

Oz first stated that “I’ll support whoever the Republican Party puts up,” but added to that he would “support Donald Trump if he decided to run for president.” Fetterman said that if Joe Biden “does choose to run, I would absolutely support him.”

“I have thought from the beginning that Oz should focus on Fetterman’s policies not his health,” said Blake Gober, political strategist with TLC Political in Virginia. “Tonight I think showcased that he could win by attacking his policies. However, tonight also showed that the attacks on his health aren’t far off. Fetterman’s ‘response’ on fracking should be cut into a TV ad and broadcast non-stop by every entity supporting Dr. Oz. I honestly thought – and bet a friend – that Oz would lose by 2-6 percent. I now think Oz will win and probably by 4-6%.”

Fetterman declined to commit to releasing more information from his physician about his stroke, saying only that his doctor believes he is fit to serve full time.

Asked if agreeing to a rapid-fire format was wise, campaign communications director Joe Calvello said, “It might not be, but the people of Pennsylvania deserve a debate, and we weren’t gonna complain. … We came to roll with it, and we did pretty damn well.”

“Tonight’s performance may raise doubts in voters minds as to whether (Fetterman) can handle fast-paced environment of the Senate,” said political scientist Sam Chen. “Additionally, since he wasn’t granted additional time, the time he lost searching for words seemingly prevented him from getting all his thoughts out in time. Voters seemed to hear more complete answers from Oz than Fetterman and part of that may be contributed to this. At the end of the day, neither candidate hit a home run, but Oz may have gained a little ground on Fetterman. Without a home run, though, the question will be whether it’s enough ground to catch Fetterman by next month.”

Fetterman has not trailed in any survey since the May primary and holds a 3.5 percentage point edge over Oz in an average of the five most recent polls in the Commonwealth.