Pa. Democrats are beside themselves with glee today, working to publicize a video of Gov. Tom Corbett citing failed drug tests as a factor in Pennsylvania’s unemployment.

“There are many employers who say, look, we’re looking for people but we can’t find anybody that has passed a drug test, a lot of them,” Corbett said during an interview with PAMatters.com. “And that’s a concern for me because we’re having a serious problem with that.” It’s at 3:40 in the video above. 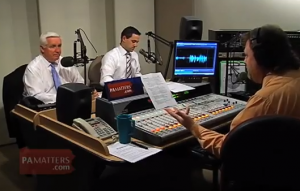 For a few days during the 2010 campaign, it looked like Corbett’s win was less than inevitable. Those days occurred just after candidate Corbett made a very similar charge. He suggested workers were passing over available jobs to retain unemployment benefits.

Reported Scott Detrow at the time:

Corbett’s liberal critics are hoping for a repeat in 2014. The push has already begun and netted a headline on ThinkProgress. Watch for a Huffington Post story and eventually, if Democrats are lucky, a spot on the Rachel Maddow Show. Then, about 10 emails from the party and its many candidates for Governor.

Update 2:30pm: We called it. Here is the Huffington Post article on the subject. And Congresswoman Allyson Schwartz was the first Democratic candidate for Governor to email a statement on the subject:

“Governor Corbett’s response to his own failed leadership on the economy shifts between making excuses and blaming and insulting the people of Pennsylvania. Either way, Pennsylvanians know it’s obviously time for a new governor.”

Update 8:00am: We were close! MSNBC’s Chris Matthews, rather than Rachel Maddow, lampooned Corbett Tuesday evening. At the 1:40 mark of this video.

The party has been all over Corbett since liberal columnist Will Bunch of the Philadelphia Daily News publicized this spreadsheet, compiled by the business school at Arizona State University. It shows that Pa.’s rate of growth

The 13-to-49 number is problematic and PoliticsPA is investigating it for another report.

The premise of the video is Corbett rebutting the use of that charge. The reason Pa.’s rate of job growth is lower than other states, he says, is because Pa. had a shallower hole to dig out of post-recession.

It’s stronger than the drug test explanation. The biggest problem with that argument: the burden of proof on Corbett to demonstrate that rates of drug use and drug test failures are significantly higher in Pa. than other states. If such numbers are similar nationally and the problem doesn’t impact Pa. disproportionately, it means every state dealt with and overcame a similar handicap.

But the Governor is on shaky ground vis-a-vis unemployment. In March, Pa. unemployment was 7.9% while the national rate was 7.6%.