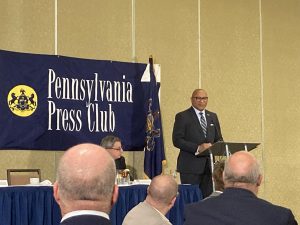 conduct a “forensic audit” in key battleground states, including Pennsylvania.

During Auditor General Tim DeFoor’s first speech at the Pennsylvania Press Club since winning the statewide office last year, he swatted back at the idea, while making a plea for additional funding for his office.

“I want to address, head on, discussions related to the election, election audits, and my department,” DeFoor said.

“Any questions about the legality or the legitimacy of the 2020 election, which of course I was a part of, have been settled,” DeFoor continued. “The election has been certified and the state and federal courts have ruled.”

“My department has moved on to do the work, which we are statutorily required to do,” he said.

DeFoor acknowledged the push from some Republicans to create an election audit bureau, which was a matter that caused division among Democrats and Republicans in Harrisburg last month during budget negotiations, and said that he’d comply if given the proper funding.

“If the legislature and the governor enact laws creating it, and fund it, I will comply by implementing it,” DeFoor said. “But, it’s scope will not be a forensic election audit bureau.”

DeFoor also laid out what his office would be able to do if it was created.

“If this is enacted by law, it will look at how an election was conducted and whether it was done correctly,” DeFoor said. “It will not certify, recount, or audit results.”

He added that his office would need subpoena power, if the election-auditing office was created.

DeFoor, the former Dauphin County GOP Controller who bested former Deputy Mayor of Philadelphia Nina Ahmad, a Democrat, by 3 points in 2020, made headlines earlier this year when he said before a state House committee that he believed his election was fair, but wouldn’t comment about other races on the ballot.

He was asked to clarify those statements and say whether or not he thinks Joe Biden won Pennsylvania “fair and square” during the Q&A portion of the program.

“I never said anything about Joe Biden,” DeFoor responded. “The question was, was that, ‘do I believe that my election was fair?”

“And my answer was, I believe it was, but I can’t speak on anybody else’s,” DeFoor continued.

DeFoor added that by the time of his election, he was the Dauphin County Controller and not the state’s Auditor General, so he was only able to vote during the 2020 election.

“So, to answer the question, I never mentioned Joe Biden in those comments,” DeFoor said. “I made those comments based on what I believe as a private citizen.”

“There weren’t any complaints with regards to my election, so obviously I would say I don’t have any problems, however I couldn’t speak for others because I didn’t know if there were other problems with other elections,” he continued.

The moderator responded to DeFoor asking, “so, do you think he won,” referring to Biden.

DeFoor described the first few months of his administration as “productive,” although “it hasn’t exactly been easy,” and cited the office currently operating at “1997 budget levels.”

“We still need to restore the department’s budget, so we can continue to aggressively protect taxpayer dollars, prevent fraud, waste, and abuse, rebuild our staff and invest in technology needed to modernize our department,” DeFoor said. “Until then, it will be difficult for my department to take on any new audits, that are not required by state statute.”

DeFoor mentioned that his office was completing a number of audits that were started during the previous administration and that he would be keeping his eyes on a wide number of matters including school districts, pensions, the Pennsylvania lottery, nursing homes during the pandemic, Gov. Tom Wolf’s business waiver program, unemployment compensation fraud, and more.