Dem Goes on the Air in Harrisburg-Area Senate Race 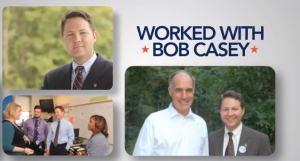 Meet Rob Teplitz. He’s 41, a Dauphin County native, and an attorney working at the PA Auditor General’s office. He’s also the man Democrats hope will be among two to four pickups in the PA Senate this year.

Wednesday, his campaign launched the first television ad of the general election.

“I got into this race to improve the future for my family and yours,” says Teplitz over a variety of photos of him working and b-roll of schoolkids. “I’ll fight to restore education funding to give our kids the opportunities they deserve.”

Fitting, perhaps, for an auditor, the ad is all still photos and no video (which means savings on production costs). It’s airing on local cable, not broadcast.

Teplitz, Chief Counsel and Policy Director in the PA Auditor General’s office, faces Republican John McNally. The former chairman of the Dauphin County Republican Committee, McNally has practiced law for over two decades and is a partner at the firm Thomas, Thomas and Hafer, LLP.

Both men graduated from Central Dauphin High School (McNally, who turns 50 on election day, 8 years earlier). Both men also have in common the fact that they were recruited by the campaign committees of their caucuses, and each has the loyalty of party insiders.

“The other side can run all the ads they want, but at the end of the day voters in the 15th want an independent voice with the experience to create jobs, reform government, and fight for more money and more reforms for public education,” he said. “Clearly that candidate is John McNally.”

Also included among the top four state Senate races are:

Teplitz won’t have to face someone with an incumbent’s name ID this year, meaning the result will hinge heavily on the presidential race. Depending on Dems’ enthusiasm level, McNally may not have to worry about the same presidential year boost that helped Hirsh.

The 15th includes the city of Harrisburg and its suburbs in Dauphin County, plus a few municipalities in York County (92 percent of voters live in Dauphin). Registration favors Democrats by 2.5 points (45.3 percent Dem, 42.8 percent GOP), and in a presidential year turnout tends to favor Democrats by a few points more.

Initially lumped in with Lebanon County, the city of Harrisburg will share the 15th district with Perry County if the proposed redistricting map holds up in court. If those lines are indeed in place in time for the 2016 election, it will be much tougher for a Democrat to win.

There’s a potential x-factor in 2012, too: Alvin Q. Taylor, the man Teplitz barely defeated in the Democratic primary. Citing what he said was foul play, Taylor said in June that he would wage a write-in campaign. If he goes through with it, he could siphon key votes from Teplitz in what is likely to be a narrow race.