A super PAC supported by the Democratic Attorneys General Association is on TV in Pa. slamming Dave Freed for opposing a review of the Jerry Sandusky case. Both Freed and his Democratic opponent Kathleen Kane are criticizing the ad. 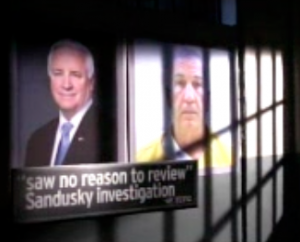 “Now, Freed defends Tom Corbett’s handling of the Jerry Sandusky investigation and said he, “saw no reason to review the case,’” says an announcer over ominous music.

The ad cites an Associated Press report. There’s just one problem. That AP report was later corrected to reflect the fact that Freed didn’t rule out a review of the Sandusky case, and indeed said he would conduct one if, when elected, he thought it was necessary.

The case of Sandusky, who was convicted on 45 of 48 counts related to his sexual abuse of minors, has been a top topic in the race. Polls have shown that most voters take a dim view then-AG Corbett’s handling of the case.

Throughout the campaign, Kane has been more vocal about the need for a review of the investigation, and on numerous occasions has said it took too long.

Freed’s campaign criticized Kane over the ad in light of the fact that the Democratic candidate has repeated blasted him over his refusal to denounce a similar Republican ad. That spot, paid for by the Republican State Leadership Committee in Washington, D.C., inaccurately suggested that Kane went soft on defendants guilty of child sexual abuse.

As of its most recent campaign finance filings, the Committee for Justice & Fairness, the super PAC paying for this ad, had received most of its funds from the Democratic Attorneys General Association.

Kane promptly condemned the ad and requested that it be taken down.

“This is not an ad from my campaign — neither I nor any of my staff or advisors saw it in advance or knew of its content — but that does not mean that I do not have a responsibility to speak out on it,” she said.

“So I am asking the people who created this ad to also strive for this higher standard by taking the ad down and replacing it with something that is not misleading. I am also calling on television stations not to air it.”

The other charge, that Freed wouldn’t prosecute John Perzel, dates to an 2008 accusation by GOP state House primary candidate Lowell Gates that the former House Speaker was behind anonymous robo-calls against him. The charges were later incorporated into Corbett’s “Computergate” investigation.