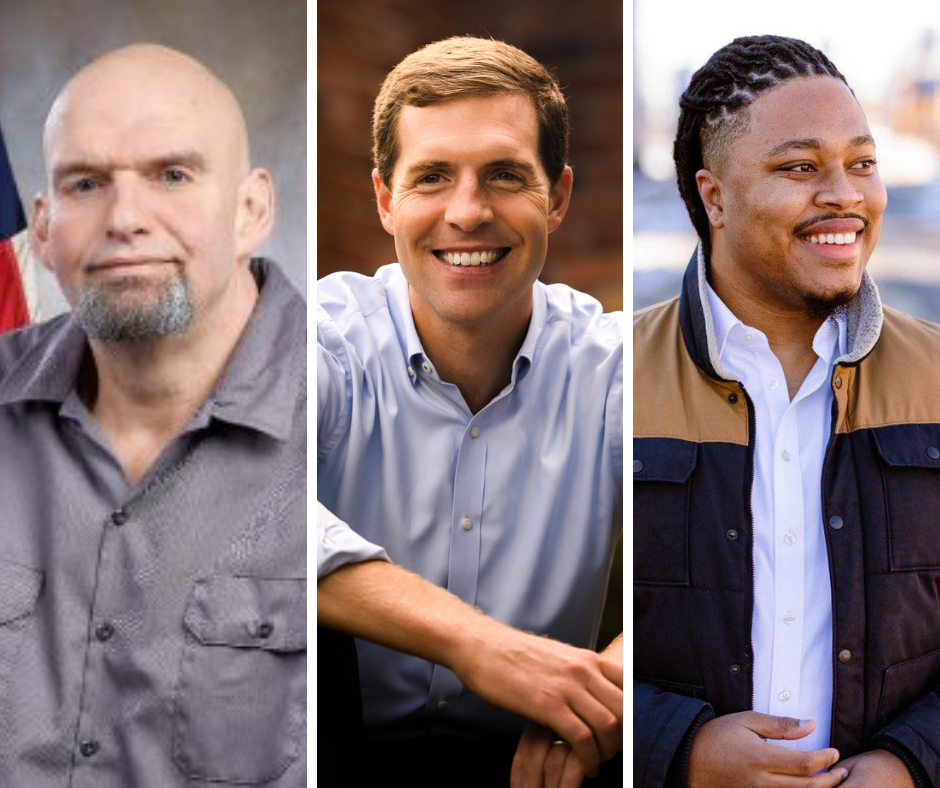 They couldn’t be much more different in appearance.

Pennsylvania lieutenant governor John Fetterman stands 6-foot-8 with a bald head, goatee, a hooded sweatshirt and a propensity for wearing shorts in the winter months.

U.S. Congressman Conor Lamb is clean-cut and dresses like the Ivy Leaguer and federal prosecutor he used to be, preferring button-down shirts and a blue blazer.

The third candidate – state representative Malcolm Kenyatta from Philadelphia – typically wears a suit and a tie depending on the situation. He is the lone Black candidate among the three and is openly gay.

Fetterman, a Harvard graduate, is a former mayor from Braddock. Lamb, who has a degree from Penn, comes from a political family in Pittsburgh. Kenyatta is a lifelong Philadelphian who graduated from Temple.

Fetterman is a self-described “unapologetic populist” who has emphasized progressive stances.

Lamb is a traditional centrist, a type that has succeeded in the Keystone State in the past.

Kenyatta says he can excite young voters as well as voters of color.

The Wall Street Journal says Fetterman looks like a delivery driver. Politico referred to him as a cartoon image of a working guy from the Rust Belt.

“It all looks the same to me,” he says of portraits of himself. “It’s like Paul Rudd, except he’s handsome, I guess. It’s kind of like, same picture—not much you can do with it.” The idea of Fetterman trying out a new look to mix things up is, of course, out of the question: “I genuinely don’t have anything to wear that different. That’s just me.”

Lamb, according to the New Yorker, is so wholesome-looking that he is frequently mistaken for a Jehovah’s Witness. He grew up in the northern part of the 18th District, in the more affluent suburb of Mount Lebanon, and was shaped by years at Central Catholic, a high school run by Christian Brothers, an order within the Catholic Church that takes a vow of poverty.

Fetterman, 52, has used his position as lieutenant governor to press for marijuana legalization and greater opportunities for people convicted of crimes to win pardons. He drew national attention for his work as mayor to end gun violence in a largely Black borough near Pittsburgh, where he still lives across the street from one of the area’s last operating steel mills.

Lamb, 37, is a devout Catholic, personally pro-life but politically pro-choice. A Marine Captain who served as a prosecutor in Okinawa, he is ardently pro-Second Amendment—one of his campaign videos features a clip of him firing an AR-15—and yet, as a former federal prosecutor who has dealt with the mayhem caused by armed criminals, he’s campaigning to strengthen background checks. More superficially, he’s a vocal advocate for the coal industry and for natural gas who has a worm farm in his kitchen and grows potatoes in his garden.

Kenyatta, 31, says he’ll fight for policies that will make people’s lives better: more affordable healthcare for everybody, cheaper prescription drugs, a fair justice system, a $15 minimum wage, and a sustainable climate and cleaner environment through good union jobs. Pennsylvania has never had a senator or governor who is Black or a woman.

“People loved Elizabeth Warren. They loved Bernie Sanders,” Philadelphia-based Democratic consultant Mustafa Rashed told the Pittsburgh Post-Gazette. “But it comes a time where people look around and say, ‘I don’t know if that person can win.‘”

Lamb, in an interview with the Journal, said he has shown that he can win tough races against Republicans. “What I don’t buy is the argument that Fetterman is the person to do that just because of the way he dresses,’’ he said.

“Those of us in politics who are in the know, we want to win the Senate race, so we want to pick the most electable person statewide, and I think a lot of people agree that that person is Conor Lamb,” said Christina Proctor, the Democratic Party chair in Washington County.

It may not come down to looks at the end of the day, as cash could be king. Fetterman entered this cycle with $5 million in the bank, opposed to just $3 million for Lamb. Kenyatta trailed significantly at $285,000.

Both Lamb and Fetterman believe that President Biden in 2020 laid out a path to Democratic victory that relies on regaining some of the party’s support in rural communities and shrinking mill towns that have swung forcefully behind the GOP.

“Voters often say that they want someone who doesn’t come off like a typical politician,’’ Democratic strategist J.J. Balaban said. “And when the Pennsylvania primary comes around, we’ll see if they follow through on that.’’