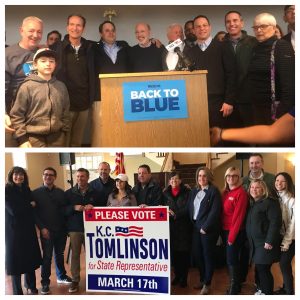 BENSALEM- The first big race of 2020 is taking shape in lower Bucks County and both parties are going all in to win it.

In just over two weeks, voters in the 18th state House District will head to the polls to elect a new state representative after longtime state Rep. Gene DiGirolamo (R-Bucks) retired from the House after securing a seat on the Bucks County Board of Commissioners.

Although three special elections are set to take place on March 17, the race between Republican K.C. Tomlinson, a third generation Funeral Director and daughter of state Sen. Tommy Tomlinson (R-Bucks), and Howie Hayes, a union plumber, in the 18th District is set to be the first real test in a key battleground in 2020 and both sides are stressing the need to win the seat.

“This race is so critical for this county.” said Bucks County Republican Party Chair Pat Poprik at a rally for Tomlinson on Saturday morning. “We need to win this more than anything. We have to send a message out that we are fielding great candidates, the best candidates, and that people recognize that and are voting for our team.”

Bucks County Democratic Party Chairman John Cordisco, a former state House member, echoed these calls to his party on Saturday afternoon at a rally for Hayes.

“This is a call to arms,” Cordisco said. “This is not just Bensalem, this is the Bucks County Democratic fight and all of us have a duty and a responsibility to engage in that fight.”

“We need to win that seat and let the Republican Party of this county know, there’s no way back,” Cordisco said.

Both parties brought out the big guns on Saturday for rallies before they proceeded to knock on doors in the district.

Since 2016, the Philadelphia suburbs, once a Republican stronghold, has been rapidly turning blue. Bucks is the lone county that still votes like a true toss-up. While the collar counties have begun embracing the Democratic Party, Republicans speaking on Saturday attempted to paint local Democrats as one with the much more progressive Philadelphia Democrats, and used safety as an issue on the ballot in the upcoming special election.

“It’s not about Philadelphia taking over. It’s not about injection sites,” Sen. Tomlinson added. “It’s not about all of those bad things, it’s about keeping these neighborhoods safe and we have great communities here. So going out into our neighborhoods and talking to our people and bringing them out, we’re going to help keep moving Bensalem moving in the right direction.”

Gov. Tom Wolf, who comfortably won Bucks County during his 2018 reelection bid, wanted those who were trying to sway voters in the area that despite the makeup of the local Republicans appearing to be different from the rest of the party, it is still in the best interest of the state to vote for a Democrat.

Wolf said that issues such as the minimum wage, non discrimination bills, criminal justice reform, and more would be addressed if the Democrats gained control of the state House and said electing Hayes would be a step in the right direction to achieving those goals.