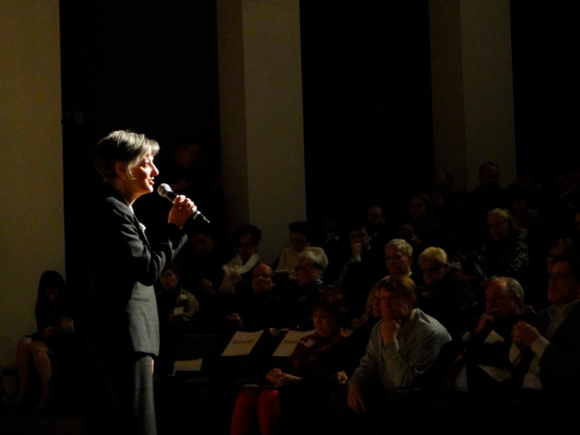 Pittsburgh – The 8 Democrats running for Governor faced the most daunting round of questions in the campaign so far on a snowy afternoon at Carnegie Mellon University.

The hosts, including the 14th Ward Democratic Club and the CMU College Dems, asked each candidate about a specific liability in his or her background, eliciting a plethora of telling responses.

The stakes were high: some of western Pennsylvania’s top Democratic brass had a front row seat to see the candidates on defense. Congressman Mike Doyle, Allegheny County Executive Rich Fitzgerald and Senate Minority Leader Jay Costa have not announced plans to endorse in the primary.

Allyson Schwartz gave perhaps her best debate performance to date. She faced a question about her work founding and managing a women’s health clinic that performed abortions. It’s been called a general election risk by conservative Democrats, but the Congresswoman shone in her defense of her record.

“I helped start a women’s health center that was an important resource for the women in the Philadelphia area,” Schwartz said. “We provided a full range of services: gynecological care, parenting planning, first trimester abortions and prenatal care. There are women today who are grateful for the dignity and fine health service they received from the Blackwell Health Center.”

Former Pa. Revenue Secretary Tom Wolf frequently boasts about his construction supply business, which pays employees a living wage and includes profit-sharing. But he seemed caught off guard by a question about his company: why are there no women on his board of directors?

He emphasized that while his family business is owned by men, women play a significant role in its leadership.He added that his company’s management committee was more telling than the board.

“The management committee, if I was to look at it, has women in spades,” he said.

“The people who run the company, however, are women and men,” said Wolf. “My success is based on the fact that women have participated equally in the leadership of this company and have done great things to make my company successful.”

Katie McGinty, the former Department of Environmental Protection, gave a vague answer in response to a question about conflicts of interest with her work for Weston Solutions and the fact that it received state grants to redevelop industrial brownfields.

McGinty faced similar questions in 2007 when the DEP awarded $2.6 million in grants to groups that employed her husband. She was not accused of wrongdoing, but the State Ethics Committee later changed the rules governing cabinet secretaries and grant awards.

In this debate, she was adamant about eliminating any semblance of conflicting interests in government.

“The public rightly has lost confidence in leaders in government, in business and across the board,” McGinty said. “We have to have absolute prohibition on any conflict of interests — period.” 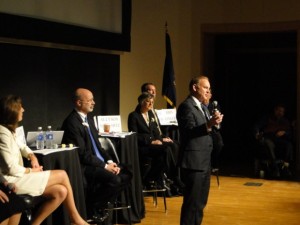 State Treasurer Rob McCord won the day with another strong performance. And in case the benefits of his experience on the campaign trail weren’t self evident, he made the point directly.

“Experience running and winning statewide in a competitive primary matters for those of you who aren’t just daydreaming but are truly committed to defeating and evicting Tom Corbett,” said McCord, with a quick glance in McGinty’s direction.

He loudly defended labor unions and public education against what he called attacks by Gov. Tom Corbett.

“For me, Pennsylvania public school literally rescued me,” he said. “We have to recognize how flawed Governor Corbett has been. If he wants to improve public education his first job is to retire.”

McGinty also discussed her belief in strengthening unions. “We need to stop with the illegality in terms of interfering constitutional right to organize and collectively bargain.”

Despite rough roads and below freezing temperatures, hundreds of people crowded the auditorium to get a look at the candidates. Unlike previous years, no western Pa. Democrat has stepped forward to seek the nomination. All of the candidates hail from the Susquehanna River valley or further east.

John Hanger was at home with the progressive East End crowd. The former Department of Environmental Protection Secretary has made marijuana legalization the centerpiece of his campaign and he received loud applause from the audience when he put it in social justice terms.

“I believe in some simple common sense and I live in the real world,” Hanger said. “Marijuana arrests are half of all drug arrests, and we are arresting African Americans at five times the rate of whites. This is wrong and it must stop.”

He also noted that his campaign would report having raised over $1 million in 2013.

Memorably, Hanger struck the most emotional note of the afternoon when he talked about his son’s suicide at age 23 and his subsequent dedication to improve mental health services.

Allentown Mayor Ed Pawlowski competed with Wolf for the title of wonkiest candidate.

Max Myers of Cumberland County faced a question about his stance on gay marriage. His background as an evangelical minister sets him apart from many of the contenders and he sought to avoid a categorical answer on the issue.

When asked if he would support same-sex marriage legislation, Myers said that he was in the middle. “I’m not answering,” he said. But he said that he was “uncomfortable with how the LGBT and women’s rights communities were treated” by the Republican party, which was why he became a Democrat.

Lebanon County Commissioner Jo Ellen Litz had the rockiest performance. She deferred a question about marijuana saying that the “FCC” was in charge of drug policy. Her conservative positions on social issues put her at odds with most of the field, but a softball question proved her biggest stumble. Asked to name her favorite place in Pittsburgh she said Presque Isle State Park, which is located in Erie.

Candidates had to give a yes or no answer to questions about the following issues.

Gay marriage. Every candidate said he or she supports gay marriage, aside from Myers and Litz who each took a pass.

Pawlowski later clarified his position when asked about it directly.

“My mother was counseled to abort me at a late stage,” he said. But while he is personally pro-life, he said he would support expanding access to women’s reproductive care.

Marijuana. Aside Litz, all the candidates said they supported decriminalizing marijuana possession and legalizing it for medical use. McCord said he was watching states that recently legalized post and that he expected the entire country would follow.

Marcellus moratorium. The candidates were, by and large, tepid. Their tone seemed apologetic to many in the debate audience – and demonstrators on the hallway outside – who made clear their support for a ban on hydrofracturing for Marcellus shale gas. Only Myers said he supports a moratorium. The rest said they back a ban on fracking in state forests and would improve drilling by taxing and regulating it.

UPMC vs. Highmark. All 8 candidates agreed that the contract dispute between the region’s leading healthcare provider and leading health insurer required state intervention to resolved. Embracing the messaging of advocates like SEIU Healthcare, the top tier candidates specifically singled out UPMC.

“It’s remarkable that UPMC has made an insurer look as good as it does!” Schwartz quipped.

McCord named the lobby of the the Omni William Penn hotel downtown, which he noted is good place to see the city’s political and business leaders.

“As an entrepreneurial type I never like to pay for office space,” he joked.

“My favorite photograph of myself is one my wife took standing across the river from PNC Park,” said Wolf. He went on describe Pittsburgh as “one of the most formidable cities in the country. I love this place” – drawing a few “aws” from the audience.

In addition to a dozen anti-fracking demonstrators, a few bold College Republicans stood outside the auditorium criticizing Democrats and supporting Corbett.

Corbett’s campaign blasted the candidates in a statement.

“With President Obama, their mentor, set to visit Pittsburgh this week, it was no surprise to see the candidates engaged in a sprint to the extreme left to win over his support for who can tax and spend more of Pennsylvanians hard-earned money.”

The statement made clear who Corbett sees as the front runner.

“Congresswoman Schwartz and all of the Democratic candidates continue to prove they are too extreme, fighting for their party’s liberal special interests over the people of Pennsylvania.