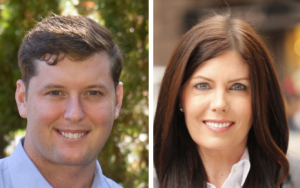 Kathleen Kane and Patrick Murphy are opposed to a law that would require women seeking abortions to obtain an ultrasound, and they want you to know about it. In a series of public events, statements and interviews, the Democratic candidates for Attorney General have played to the base on the political issue.

Murphy has announced that he wouldn’t enforce the law as AG (probably moot, as the bill at this point is unlikely to get a vote let alone pass). On Monday, he called on Republican candidate Dave Freed to repudiate comments on the bill by Governor Tom Corbett. Corbett said women who did not want to view the image of the ultrasound, “just have to close your eyes.”

Freed is the District Attorney of Cumberland County.

“There is no legal justification for forcing a woman to undergo an invasive ultrasound, and after careful analysis, I believe that no reasonable arguments can be made to support the Constitutionality of this bill,” Murphy said in his demand that Corbett apologize. “As Attorney General, I could not defend it against a Constitutional challenge.”

Kane, meanwhile, has talked about the issue at length with the press – especially Ronnie Polaneczky. The Daily News columnist has written two pieces about Kane and the ultrasound bill in the past week.

“Thank You, Kathleen Kane,” read the headline of the first. She simply highlighted Kane’s own words on the topic:

“As the only candidate in the Democratic Primary race for Attorney General who actually has had an ultrasound, I can tell you that it is an invasive, uncomfortable, often humiliating experience. As the only candidate in the Democratic Primary who actually has prosecuted criminal cases in a Pennsylvania court room, I can tell you that this bill constitutes an illegal search and seizure. Before law enforcement can search the properties or possessions of drug dealers, we must first serve them with a search warrant.  Criminals are afforded more rights than this wrongheaded ultrasound bill affords women.  This bill is yet another assault on women’s rights.  I stand firmly against it and am urging state lawmakers to do the same.”

Polaneczky echoed the theme in a second, full-length column.

It’s a bit of a tactical shift for Kane, who thus far has sought to limit the focus of the campaign to the the crime and punishment issues that have historically defined the office. The Inquirer’s Jeremy Roebuck summed it up well in his recent look at the race a week ago:

Kane, who spent 13 years in the Lackawanna District Attorney’s Office, has approached her campaign from a different angle, hewing to a defined view of the job while keeping the broader politicking of Murphy and, historically, the party at arm’s length.

Kane is a former assistant District Attorney from Lackawanna County, Murphy is a former Congressman from Bucks County.