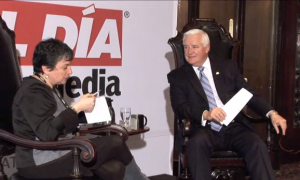 They’ve made it clear in a couple of press releases, complete with links to 13 major media outlets. Each of them picked up a story on the Governor’s recent comments at a forum hosted by the Spanish-language newspaper Al Dia after the video was publicized by left-leaning website Think Progress Wednesday.

Moderator: Do you have staff members that are Latino?
Corbett: No, we do not have any staff members in there. If you can find us one, please let me know.
Moderator: I am sure there are Latinos that…
Corbett: Do any of you want to come to Harrisburg? *laughter* See!?

Democrats are taking those comments and running.

“It’s another comment that reveals how out of touch Tom Corbett is with the people of Pennsylvania,” the PA Dems opined.

“A Governor’s administration must set the tone by reflecting our diversity with talented, skilled men and women of all backgrounds,” said Congresswoman Allyson Schwartz, one of the candidates vying to unseat Corbett.

What are they talking about? Corbett’s Secretary of Health for 2 years was Eli Avila, who among other things is a first generation Puerto Rican. It’s clear from the audience response in the video that his joke about Latinos moving to Harrisburg fit in with the tenor of the event and was well received.

Perhaps chastened by the PR cost of their delay with the flap over Corbett’s recent drug tests remark, his office decided to push back against this creeping narrative firmly and immediately in a statement Tuesday.

“This is just another attempt by a liberal blog in Washington D.C. to malign the governor by taking comments out of context made during an hour-long interview with ‘Al Dia’ newspaper, based in Philadelphia,” said Corbett spokesman Kevin Harley.

“This is just another attempt by an extreme, left-wing blog to malign Governor Tom Corbett.”

That release reiterated Avila’s appointment and named a number of other Latinos Corbett has appointed to various posts.

“I meet with the governor to talk about important issues in the Latino-Hispanic community,’’ said Maria Montero, who Corbett appointed director of the Governor’s Advisory Commission on Latino Affairs.

It’s PR 101, but that represents an uncharacteristically quick response and could portend a new approach to damage control in the Governor’s office.

The final note from Corbett’s office:

In addition, Ken Trujillo, was nominated by the governor as commissioner for the Liquor Control Board. His nomination, however, was blocked by Senate Democrats.