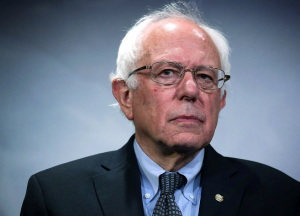 It’s one of the most overused cliches in political journalism, but there’s a reason for that.

“I am not a member of any organized party,” Will Rogers once wrote. “I am a Democrat.”

At what is supposed to be Hillary Clinton’s convention, there are an awful lot of Bernie Sanders people around.

Yesterday, if you happened to be in Center City, you saw Bernie supporters already marching.

The real disruption, though, concerns the leaked the DNC emails. The Vermont Senator used the opportunity to finally push aside DNC Chair Debbie Wasserman Schultz.

Nonetheless, Wasserman Schultz remains committed to serving as Chair through the convention.

She got a preview of what that means this morning when the Congressman addressed the delegation of home state of Florida. Sanders backers shouted “Shame!” and held up signs during her speech. Many of them just printed out the word “emails” in big, bold, underlined letters on a plain piece of paper. It’s fair to say they are people looking for a grievance and Russian hackers have given them one.

The Floridian finally succumbed to reality in the past few minutes, saying that she won’t take the stage at the convention.

Still, Sanders supporters are frustrated and unhappy. Speaking this afternoon he called for the election of a Clinton/Kaine ticket only to be met with boos.

This morning on the train ride over I encountered one such woman, sporting a #BernieorBust t-shirt, who contended that since the delegates still haven’t voted yet the contest isn’t over.

Which brings us to tonight.

New Jersey Senator Cory Booker, First Lady Michelle Obama and Massachusetts Senator Elizabeth Warren are all expected to speak. All three will be popular with the crowd, especially Warren, who will likely have the job of bashing Donald Trump.

The closer, however, will be Bernie Sanders.

The Vermont Senator’s speech will set the tone for the rest of the week and possibly for the rest of the election. Will he salve the wounds of his progressive die-hards and convince them that voting for Hillary Clinton is imperative to stopping Donald Trump? Or could his speech fall short and leave the party divided at a crucial hour?

It’s Bernie Sanders’ night. He’s worked decades to earn a platform this large. We’ll find out how he intends to use it tonight.