Dems Try to Put Freed on the Record on Ultrasound Mandate 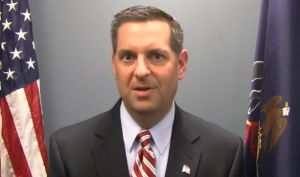 It’s not likely to ever become law in PA, but it’s certain to be a campaign issue. After it emerged as an issue in the Democratic Attorney General primary, the party seeks to put Republican hopeful Dave Freed on the map on the stillborn ultrasound mandate legislation.

The party started a petition and is running online ads to highlight the issue.

“Where do you stand on the mandatory ultrasound bill? Why won’t you repudiate Gov. Corbett’s offensive and dismissive comments to women?” said Mark Nicastre, spokesman for the Pennsylvania Democratic Party. “If David Freed is unwilling to come out against Gov. Corbett during the campaign due to receiving the governor’s endorsement, how will he ever be an impartial watchdog of the governor in office?”

Freed is unopposed in the GOP primary for AG; the Democratic hopefuls are Kathleen Kane, a former prosecutor from Lackawanna County and Patrick Murphy, a former Congressman from Bucks County. Murphy has also called on Freed to take a stance on the bill.

Freed has yet to delineate his position on the merits of the legislation. He told WITF:

“That’s playing politics with this issue.  This idea of ‘I call on you to denounce this, or denounce that, or do this, or do that,’” said Freed.  “I think that’s a lot of political hullabaloo at this point that really doesn’t have a lot to do with who’s the most qualified candidate for attorney general.”

His campaign similarly brushed the question aside.

“The PA Democratic Party must be incredibly worried about their prospects this November. While both of the under-equipped Democratic Attorney General candidates engage in civil war, all the Party’s spokesman can do is attack David Freed,” said Freed campaign manager Tim Kelly.

Kelly called on Kane and Murphy to apologize for remarks by Democratic consultant Hilary Rosen about Ann Romney.

The AG’s office is a priority for Republicans in November; numerous GOP sources indicate that it is Gov. Tom Corbett’s top focus.

One Democratic strategist noted that a Democratic AG could make public files from Bonusgate, as well as the recent investigation at Penn State which, depending on what’s inside, could theoretically set a less-than-favorable tone for the Guv’s re-election effort in 2014.

Meanwhile, the PAGOP rolled out this video to introduce Freed to voters: