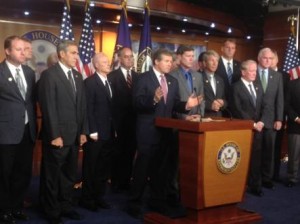 Here’s the latest on the government shutdown from the Pa. perspective. Rep. Charlie Dent pushes a new compromise after he and the other 4 ‘moderate’ GOP Reps miss an opportunity to push back at GOP.

On Monday Rep. Charlie Dent (R-Lehigh) broke off from Republican ranks and urged moderate members of his party to pass a clean Continuing Resolution (CR).

A CR is a band-aid solution that would fund the government at pre-approved levels for about six weeks. A clean CR has no strings attached (in this case the strings are defunding or delaying Obamacare).

On Wednesday, four other Republican Congressmen from PA (Meehan, Gerlach, Fitzpatrick, and Barletta) said that they would join Dent in support of this measure.

Up to this point however, Dent is the only one of the five who has had the opportunity to substantiate his claim with a vote. On Monday night, Dent voted against a GOP supported bill that included a provision delaying the individual mandate for a year.

Wednesday, House Democrats repeatedly tried to force a vote on a Senate-passed clean CR. After being denied by the chair, Rep. Chris Van Hollen (D-MD) asked for an appeal. When the appeal went to a vote, it was soundly rejected by the GOP.

Although it was only procedural at that stage, Dent and the other four “moderate” PA Reps opted to not support the Dems in their attempt to get a vote on the clean CR. While it is rare for members of Congress to buck their party on procedural votes, this appeal offered them a chance to take a prominent stand against the rest of their party. They chose not to.

“Another day, more hypocrisy from Congressman Dent, who says he wants to vote on a clean budget resolution – but now has irresponsibly voted against his own request twice – all because he would rather side with his political party than work on reasonable solutions,” said Emily Bittner of the DCCC.

Despite heeding the party line in that instance, Dent once again made a moderate play on Thursday when he laid out plans for a potential compromise.

Trying to find a way to appease both parties, Dent urged House Republicans to end the shutdown, as long as Democrats were willing to repeal the medical device tax included in Obamacare

Meehan, Gerlach, Fitzpatrick, and Barletta joined Dent in support for this compromise that would dismantle a tax most Republicans and a portion of Democrats have faulted.

This tax has plenty of opposition from Democrats, and only came into existence as a mechanism to help fund the law. It won’t seriously impact Obamacare’s implementation, coverage or quality. Because of this, it might be a relatively acceptable loss for Democrats to swallow.

That being said, both President Obama and Senator Harry Reid have held that they would not consider any compromise that chipped away at the ACA.

Both Senators Toomey and Casey oppose the medical device tax.

Rep. Mike Doyle (D-Alleghany) also entered the fray on Thursday when he made an impassioned one minute speech on the floor attacking Republicans for their negotiation tactics.

Doyle compared the Republican strategy to someone who asks if they can burn your entire house down, and then tries to negotiate by talking you down to only burning one floor or the garage.

“Let me say to my colleagues, If you would just stop trying to burn down the house, we can talk.”

The video is worth a watch:

The other major action that went down on Thursday was the House Republican’s continued attempt to pass piecemeal bills through Congress.

Likely knowing that they would be rejected by the Democratic Senate, the House passed a number of funding bills that narrowly targeted areas of the government affected by the shutdown, including veterans’ benefits and national parks.

These votes will serve as talking points for Republicans as they try to shift the blame of the shutdown on to Democrats.

As Politico reported on, the piecemeal approach was also used during the 1996 shutdown, but to more success.

On each of the piecemeal votes, a number of Democrats voted with Republicans, but thus far the PA reps have not broken party lines.