Dent TV Ad Goes Negative Because, Why Not? (Watch Video) 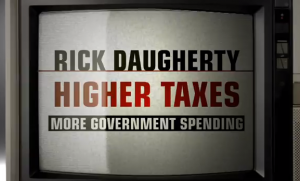 Republican Congressman Charlie Dent (R-Lehigh) is on TV for the first time in 2012, and half of his introductory spot blasts his low-profile opponent Rick Daugherty.

The ad knocks Daugherty, the chair of the Lehigh County Democrats and an executive at a local nursing home, on government spending using footage from Daugherty during a spring primary debate.

The commercial switches to Dent.

“Government overspending is the problem, and raising tax rates is not the solution,” he says. “Higher tax rates will not improve the economy or create jobs. For more American jobs, we need fiscal responsibility in Washington.”

The ad, which was produced by longtime Dent media consultants Dave Murray and Tim Perskie, is airing on cable Berks, Dauphin and Lebanon counties – the areas that were added to PA-15 during redistricting. Dent is looking to introduce himself to his new constituents, who make up 28 percent of the newly redrawn district.

After years as a perennial target for Democrats, Dent looks ready to cruise to re-election.

So why, against an opponent with low name ID and no money for his own TV ads, did Dent’s campaign decide to broadcast his name?

“Our opponent’s name is on the ballot and Charlie has had success because of his belief in the saying that ‘you either run hard or you run unopposed,’” said Dent Campaign Manager Shawn Millan.

“Sure, you could make the argument that it is introducing Rick to those same voters. However, his saying that the government’s problem is not that it spends too much, but that it taxes too little, is not a position held by many voters.”

“Federal revenue is down significantly,” he said, citing this website. “Here it is from the Congressional Budget Office:

Over the past 40 years, federal revenues have ranged from nearly 21 percent of gross domestic product (GDP) in fiscal year 2000 to less than 15 percent in fiscal years 2009 and 2010, averaging 18 percent of GDP over that span. Most of the revenues–about 82 percent in 2010–come from the individual income tax and the payroll taxes used to finance Social Security, Medicare, and the federal unemployment insurance program. Other sources of revenues include corporate income taxes, excise taxes, estate and gift taxes–all together about 13 percent of revenues in 2010–and nontax revenues such as earnings of the Federal Reserve System, customs duties, fines, and various fees. Variation in individual income tax receipts, stemming from both policy changes and economic developments, has generated the largest fluctuations in revenues as a percentage of GDP.

Under current law, revenues will rise significantly from their recent low relative to GDP as the economy recovers from the recession and the tax reductions enacted in 2001, 2003, and 2009 expire. The Congressional Budget Office (CBO) projects that under current law, federal revenues will reach 21 percent of GDP in fiscal year 2020, just above their peak share of 10 years ago.