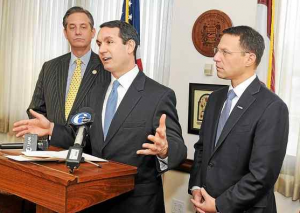 “I served with Josh in the state house and saw first-hand the way he took on the status quo and worked to restore integrity to our system. That’s exactly what he’ll do as Attorney General,” said Auditor General DePasquale. “I look forward to partnering with Josh to increase accountability and reform our state government.”

“I’m deeply grateful for the support of these strong York leaders, particularly my former colleague and good friend Eugene DePasquale,” Shapiro responded. “These leaders agree with me that the Office of Attorney General needs to protect all Pennsylvanians. As Attorney General I’ll be tough on criminals whether it’s the drug dealers who bring heroin into our communities, the frackers who pollute our air and water and the scammers who target our seniors.”

“Josh knows that Pennsylvania’s Attorney General is the people’s lawyer, the one person people all across our Commonwealth can call when they have a problem,” said State Rep. Schreiber at a Thursday rally in York. “From stopping scams against seniors to defending our constitutional right to clean air and pure water, Josh will be an Attorney General who fights for us.”

“Josh has shown time and time again that he’ll protect the rights of all Pennsylvanians,” added York Mayor Kim Bracey. “He’s governed as a proud progressive Democrat, leading the fight for marriage equality, opposing a discriminatory Voter ID bill and stopping the fees to Wall Street money managers. Those are the same values he’ll bring to the Attorney General’s office.”