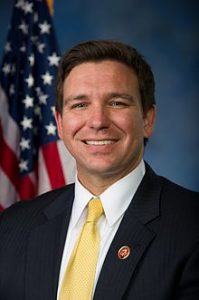 A potential 2024 GOP presidential candidate will headline a Republican Party dinner in Pittsburgh later this month.

Florida Gov. Ron DeSantis will be headlining the Allegheny County Republican Committee’s Lincoln Day Dinner on May 20 at the Wyndham Grand Pittsburgh Hotel.

Allegheny County GOP Chairman Sam DeMarco expressed his excitement about DeSantis’s upcoming visit in an interview with PoliticsPA. The event was first reported by the Philadelphia Inquirer.

“We’re very excited and looking forward to hearing from the governor,” DeMarco said to PoliticsPA. “We think he has done a phenomenal job managing COVID and overall as the governor of Florida.”

“When you compare that with the financial mess that Tom Wolf has put us here in Pennsylvania, we look forward to hearing from someone who knows how to do the job and do it right,” DeMarco continued.

DeSantis has emerged as a potential 2024 Republican presidential frontrunner. Trump recently described DeSantis as a friend and someone he would also consider as a running mate, should he run in 2024.

DeMarco echoed the sentiments from many Republicans who view DeSantis as presidential material.

“I think that right now, if President Trump chooses not to run…  that Ron DeSantis has to be looked at as the frontrunner,” DeMarco said to PoliticsPA.

He continued to specifically credit DeSantis’ handling of the COVID-19 pandemic as the reason he would deserve to be the GOP frontrunner in 2024.

During a straw poll at the Conservative Political Action Conference’s gathering in Florida in late February, Trump was the highest vote-getter earning 55% of support to be the 2024 GOP nominee, while DeSantis finished in second place with 21%. When the straw poll didn’t include Trump, DeSantis led the way with 43%.

The Pennsylvania Democratic Party slammed DeSantis and linked him to Trump in their response to his upcoming trip to the state.

“Inviting someone like Governor DeSantis to speak to the Allegheny County Republican Party, who just today is signing un-American, groundless voting restrictions into law, proves what most Pennsylvanians already know: PA Republicans are the party of Donald Trump, extremists and conspiracy theorists,” said PA Democratic Party Deputy Communications Director Rosie Lapowsky. “Democrats are fighting for Pennsylvanians, putting checks in families’ hands and making historic investments in our infrastructure, but Republicans just want to fight Pennsylvanians and their democratic rights.”

While DeSantis will headline the event, a majority of the 2022 GOP potential statewide candidates for governor and Senate in Pennsylvania are expected to be in attendance.

This is the second year in a row that the Allegheny County GOP is hosting a well-known figure in the party.

Capacity is limited due to COVID-19 restrictions.