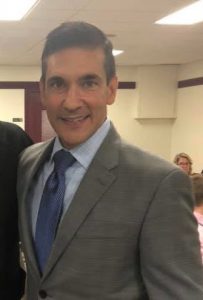 The report states DiGiorgio sent a friend request to Goldstein on Facebook in October amid her bid for City Council in 2019. The two shared flirty messages on the Facebook messenger application within the first 48 hours, which included DiGiorgio sending an Instagram picture of Goldstein saying that she was “nice to look at” and declined her LinkedIn request because saying she was “too beautiful to follow everywhere.”

The report continues that DiGiorgio and Goldstein continued to message about each other’s looks, which resulted in Goldstein sending a picture to him to her “right index finger pulling at the right corner of her lower lip” after DiGiorgio requested a picture saying it was her “duty to the party.” Goldstein messaged DiGiorgio saying that he was “definitely one of the hottest 50-year-olds” she knew, but said she has a boyfriend that she loves and that he has a family.

The two met for dinner in December once and backed out of plans to meet months before. DiGiorgio suggested on exchanging photos on Snapchat as opposed to Facebook messenger because “Snapchat deletes. Text is forever”. After the two exchanged sexually charged messages, DiGiorgio sent a picture of his “erect penis” to Goldstein on Facebook messenger. She screenshot the picture because she said she “didn’t really feel safe with this man.”

Goldstein tried to get DiGiorgio’s endorsement, but he stayed out of the Philadelphia Republican City Council primary that took place in May. She sent a screenshot to DiGiorgio of the law firm that DiGiorgio works at that showed a “large contribution” made to Dan Tinney, who became the highest vote getter in the GOP primary. After pressing DiGiorgio for help, he said he’d get her to the White House at some point.

Goldstein messaged DiGiorgio telling him that he “sexually harassed” her citing his comments about sending a picture to her as a “duty to the party and to the country to [expletive] you”.

DiGiorgio responded by saying he thought he was being a “perfect gentleman” to her at their meeting in a restaurant and said he was “shocked and disappointed” she suggested he was sexually harassing her, saying he “thought they were friends.”

Goldstein finished last in the seven candidate GOP primary and did not advance to the November ballot, but did not blame DiGiorgio for her last place finish.

According to Goldstein, DiGiorgio tried to press her into signing a nondisclosure agreement that would prevent her from “disparaging” him. Michael Schwartz, representing DiGiorgio as a private attorney, did not respond to multiple requests for comment from the Inquirer.

DiGiorgio’s resignation announcement described the sexual harassment claim from Goldstein as “fundamentally untrue” and said these characterizations were made from her after he declined to endorse in the primary.

The Pennsylvania GOP release from DiGiorgio thanked him for his “30 years of active leadership” and leaving the party “stronger and poised for future victories.”

It is unclear who will succeed DiGiorgio as party chair on a full time basis, but Vice-Chair Bernie Comfort is now in the role of Acting Chair.

Philadelphia Inquirer’s Jonathan Tamari reports that former GOP Congressman and one-time Senate candidate, Lou Barletta is being pushed to become a new state chairman. Barletta said “supporters” have urged him to make a bid for PA GOP chair and hasn’t ruled out a run.

Former PAGOP Chair Rob Gleason, who preceded DiGiorgio, tells PoliticsPA that Lawrence Tabas would be a good fit for state chair, although he has not confirmed from him that he is interested in the role.

“Lawrence would be wonderful and be acceptable from the White house down to the rank and file members,” Gleason said.

This article was updated with a comment from the former Pennsylvania GOP Chair Rob Gleason.