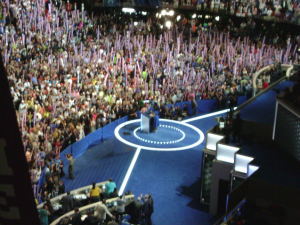 The convention floor is definitely a unique place. Tonight, however, felt especially peculiar.

There was clearly a majority of Clinton delegates, but enough Sanders delegates were vocal enough that the crowd came off as divided.

It certainly started out that way.

If you happened to be sitting in the upper bowl of the Wells Fargo Center, without the promised free wifi from Comcast and your own hotspot wasn’t working (you know, hypothetically), then reading the crowd was a necessary and enlightening experience.

So when Ohio Rep. Marcia Fudge sought to step in for departing DNC Chair Debbie Wasserman Schultz, it was readily apparent that things weren’t going well.

Every mention of Hillary Clinton and Tim Kaine brought boos from the Sanders supporters, although Clinton backers were able to drown them out. Still, the passionate undercurrent must have been disturbing to the DNC. It didn’t help that Fudge was apparently unprepared for the task and at times seemed like a deer in the headlines.

Former Denver Mayor Wellington Webb, and a Sanders delegate from Maine named Diane Russell, did a good job of tamping down the furor. The fact that a good number of Sanders delegates left the hall probably helped too. Either way, the jeers slowly but steadily began to die down.

Four Pennsylvania Democrats took the stage in the afternoon, led by Congressman Bob Brady who commended the POW-MIA veterans. Congressman Brendan Boyle also spoke,telling his own personal story while questioning why Donald Trump believes the American Dream is dead. “Why does he want to lead America, when he doesn’t even believe in America?”

Mayor Jim Kenney, who started off with the appropriate “Yo Pennsylvania!”, compared the Republican nominee to the Know-Nothing Party.

By the time Senator Bob Casey spoke, the upper section reserved for the special (i.e. misc.) press, was filled in with spillover attendees. While it was louder, at least it allowed me to get an even greater sense of the room.

Sen. Casey used his time to attack Trump over outsourcing his products, “If he’s the champion of working people, then I’m the center of the 76ers,” he joked. “The man who wants to make America great. Doesn’t make anything in America.” His speech was preceded by a humorous video on this subject starring Austin Goolsbee and Ken Jeong.

The Hillary/Bernie dynamic returned when Al Franken and Sarah Silverman came out together to introduce Paul Simon who sang “Bridge Over Troubled Water”. Silverman earned massive applause when the comedian and Sanders supporter declared “To the ‘Bernie or Bust’ people, you’re being ridiculous!” That provoked the rare, astonished cheer from the crowd.

It was at this point that the first signs starting making their way around the room, blue “Stronger Together” placards being passed out by volunteers.

There’s a moment at every convention gathering when a speaker finally grabs hold of the attendees and reminds them that they are there to watch the proceedings. This orator turns a giant room full of strangers into an audience.

New Jersey Senator Cory Booker was that speaker Monday night. His “Rise Together” message, accompanied by green placards, shook up the crowd. Sen. Booker definitely took home the award for most exciting speech.

The Wells Fargo Center may have been enthralled by Senator Booker, but they were in love with the First Lady. In fact, Several black women sitting behind me were only there to witness Michelle Obama speak and when she took the podium she was the only guest that held the full attention of the audience throughout.

The First Lady gave an emotional and uplifting address, which also managed to take shots at the Republican nominee without naming him.

When she got emotional talking about her daughters looking up to the first female President, it was a genuine moment. You could viscerally feel it from the delegates and fans who were waving “Michelle” signs.

In fact, there’s was so much emotion that Elizabeth Warren’s keynote speech was a bit of an letdown. At least it felt that way in the upper bowl of the arena, it may well have gone over better on television.

The Obama and Clinton loyalists were impressed with her, though, as they held aloft the new “I’m with Her, She’s with Us” signs.

Finally, the headliner emerged. Senator Bernie Sanders received a prolonged ovation from the audience, driven from his faithful delegates and supporters. In the second deck, Sanders’ fans congregated at the very top of the stadium in groups.

The Vermont Senator did his best to unite the party.

“Any objective observer will conclude that – based on her ideas and her leadership – Hillary Clinton must become the next president of the United States,” he declared. “The choice is not even close.”

Yet in my section, the rowdy Sanders fans weren’t satisfied. “They stole it from you,” one man yelled a few times, just a single example of his many outbursts (if you guessed he was a young, bearded fellow with a Bernie shirt and a bandana wrapped around his head, then congrats).

It was also noticeable that many, including the black women behind me, who came to see Michelle and stuck with Elizabeth didn’t feel the need to listen to Bernie. The upper bowl was about half empty by the time he finished.

Nonetheless, Sanders’ call for unity was enthusiastically received by most of the crowd although there was an ever-present undercurrent of displeasure.

During the primetime hours, when the immense room finally got quiet, you can hear a strange whirl in the upper decks. It took a minute to figure it out. Rain was pounding the roof of the Wells Fargo Center.

There was a storm overhead.