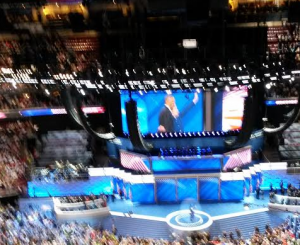 “And now I’m ready to pass the baton…”

It’s incredibly unique for a departing President of the United States to say those words. Last night, though, Barack Obama said them about the woman he always assumed and hoped would be his successor.

As I touched on yesterday, the President made legacy the central theme of his speech. Not just his legacy, but that of the Democratic Party, Hillary Clinton and America as well.

“We’re not a fragile people. We’re not a frightful people. Our power doesn’t come from some self-declared savior promising that he alone can restore order as long as we do things his way. We don’t look to be ruled,” he said before pointing out the legacy of the home of this year’s convention. “Our power comes from those immortal declarations first put to paper right here in Philadelphia all those years ago: We hold these truths to be self-evident, that all men are created equal; that We the People, can form a more perfect union.”

For the most part, the third day of the DNC was unified.

Save some protests from Sanders supporters, especially those in the California delegation, Tim Kaine was accepted unanimously as the VP nominee. Later those same delegates would disrupt Leon Panetta’s speech and “No TPP” signs could still be seen around the arena. Nonetheless, the audience was the most consistently enthusiastic that it has been this week.

The night, however, belonged to President Obama.

In an impressive feat, he weaved his message into the American story.

To counter the narrative that America is in trouble or being lost he went back to his ancestors, Scotch-Irish on his mother’s side. He went on to describe how their values traveled over to Hawaii and Chicago through him, accepting new creeds yet always staying true.

Calling back to his 2004 DNC speech, (Wednesday was its 12th anniversary) he again pointed out how his story was just one example of what makes America the melting pot of the world.

“That is America,” he declared. “Those bonds of affection; that common creed. We don’t fear the future; we shape it. We embrace it, as one people, stronger together than we are on our own.”

Finally, the President didn’t let the man he once infamously termed a “carnival barker” off the hook.

“You know, the Donald is not really a plans guy. He’s not really a facts guy, either,” the President stated. “Does anyone really believe that a guy who’s spent his 70 years on this Earth showing no regard for working people is suddenly going to be your champion? Your voice?”

His most piercing shot, though, didn’t mention Trump by name.

“Anyone who threatens our values, whether fascists or communists or jihadists or homegrown demagogues, will always fail in the end.”