Dispatch from the 2016 GOP Winter Meeting 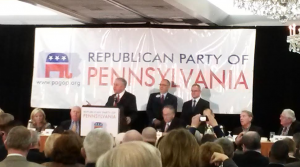 The Pennsylvania GOP gathered in Hershey this morning to prepare for a crowded election year.

“Our No.1 priority this year is to re-elect people,” Chairman Gleason declared. “Hillary Clinton can not win the presidency without Pennsylvania.”

While most of the talk was about local races, the presidential race was always looming.

Among the attendees some wore stickers for Marco Rubio and John Kasich while others carried signs for Donald Trump.

A number of GOP officials addressed the party members.

Congressman Tim Murphy began by speaking passionately about addressing the issue of mental illness in America.

State Senator Scott Wagner followed with a status update on the legislative elections.

“We’re up against the Democrat[ic] machine and all their union money,” Sen. Wagner stated. “So we’ll need to raise $5 million.”

Wagner cited low oil prices and a tough month for the Dow as signs that a recession is coming.

“We have the worst job creator enemy in this country who sits in the Oval Office,” Wagner asserted. “This is the do or die moment for America.”

“We had him down on the floor with our foot on his throat and we let him up. Next time, we won’t let him up.”

House Speaker Mike Turzai earned a round of applause for his handling of the budget stalemate, specifically rejecting any tax increases. Pointing out former Lt. Gov Jim Cawley in the crowd, he praised former Gov. Corbett for overseeing four straight years of a budget on time with no tax increases.

“This Governor wants to create havoc and run a permanent campaign,” the Speaker contended.

He also stated that Wolf signed about 90% of the GOP’s budget and declared that the Governor doesn’t care about PA citizens who are struggling.

Afterwards, the regional chairs gave reports from their meetings, the highlight of which was when the Southwest Chair Mike Baker twirled a Terrible Towel for the Pittsburgh Steelers, who are playing in the Divisional round of the NFL playoffs tomorrow.

Finally, the party members voted on whether to endorse any statewide candidates.

“We’re going to once again return the office of Attorney General back to the bright star of our commonwealth,” Rafferty stated.

He also pledged to not seek higher office while Attorney General if he is elected.