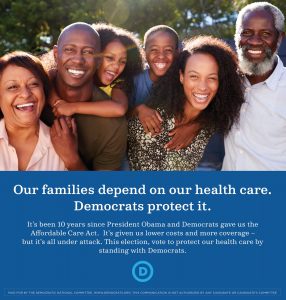 The path to victory for the Democratic Party across the country relies heavily on running up the score among African American and Latino voters. On Monday, which was the 10th anniversary of the Affordable Care Act, the Democratic National Committee launched a “diverse media advertising” campaign aimed at attacking the Republican Party’s message on healthcare in six battleground states that President Donald Trump won in 2016, including Pennsylvania.

“Victory in 2020 will be won in Black and Brown communities throughout the country, and we cannot afford to take a single vote for granted,” said DNC Chair Tom Perez. “President Obama, Speaker Pelosi, and Democrats in Congress made access to health care a reality for millions of people, especially in communities of color, and Trump’s agenda has trampled on that progress. In a time where America is facing a pandemic, it is important for voters to remember who has their back when it comes to protecting and expanding access to health care.”

The Republican National Committee described the Affordable Care Act as “disastrous” and touted the healthcare plans from the Trump administration.

The press release from the DNC added that this overall ad buy, which is a six-figure investment in minority-focused media outlets across the six states that will officially launch in the coming days, includes print ads and radio ads that will both be present in the keystone state.

The print ads, which will be published in Pennsylvania, Michigan, and Wisconsin, will be placed through the National Newspaper Publishers Association (NNPA) and will tout the “benefits” of the ACA, specifically citing the protections for preexisting conditions.

The radio ads, which will be produced by a Hispanic-owned creative agency and will air on Spanish-language stations throughout Pennsylvania, Arizona, and Florida, will also boost the ACA and the Democratic Party’s commitment to “providing access to quality, affordable health care to the Latino community.”

According to a spokesperson from the DNC, the radio ads will reach Latino voters, primarily in southeastern Pennsylvania, but the overall investment will be in the Philadelphia and Pittsburgh regions and will continue to air through the general election.

Pennsylvania also holds the distinction as the lone state in this ad campaign that is going to carry both the print and radio ads.

While Trump became the first Republican presidential candidate to carry the state since 1988, the DNC’s ad campaign is looking to exploit weaknesses the president has in Pennsylvania.

According to a Morning Call/Muhlenberg College poll released in late February, Trump’s strongest numbers from Pennsylvanians come on the economy with 58% approving of his performance on the matter, while 34% disapproved. However, on the second most important issue on voters’ minds in the state, healthcare, which is the focus of this ad campaign, Trump received poor reviews with 36% approving of his performance on the issue, while 50% disapprove of his handling of healthcare.

Many pundits point to Trump’s success flipping over white working class voters who previously voted Democrat in Pennsylvania as his key to victory, but he also did make improvements over then-Gov. Mitt Romney, the 2012 GOP presidential nominee, among latino voters.

While Trump made improvements among latino voters in comparison to the previous GOP presidential candidate, he didn’t receive a significant boost among black voters in Pennsylvania.

Trump’s support among black voters in Pennsylvania in 2016 was just a tick down from the 8% national average, with 7% of black voters supporting Trump in Pennsylvania, while Sec. Hillary Clinton received 92% of the vote, according to a CBS exit poll.

In comparison to the 2016 election, the percentage of African American voters was only slightly higher for the Democratic presidential nominee in 2012, when 93% of black voters supported President Barack Obama in Pennsylvania, while then-Gov. Mitt Romney only received 6%, according to a New York Times exit poll.

The Trump campaign is attempting to improve their standing among black voters with a campaign launched earlier this month by opening Black Voices for Trump Community Centers in seven states across the country, with one office opening in Philadelphia and another in Pittsburgh.