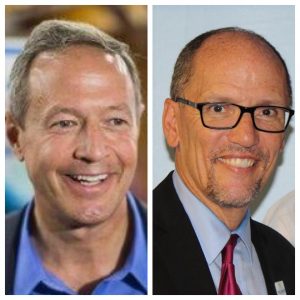 Over the last week, DNC Chair Tom Perez and former Maryland Gov. Martin O’Malley made several stops in Pennsylvania to promote the candidacies of several Democrats and the DNC investment into the state.

The DNC announced it is investing more than $595,000 in Pennsylvania for organizing races from the school board to the Governor’s race, with a “specific emphasis on engaging and investing in African American, Puerto Rican and Latino, and rural communities”, according to a press release from the DNC. O’Malley’s visit this past weekend, included making stops in the suburbs of Philadelphia to canvass with multiple women vying for state house seats and congressional candidates, Chrissy Houlahan (PA-6) and Madeleine Dean (PA-4).

On Wednesday, Perez joined lieutenant governor candidate John Fetterman and 6th congressional district candidate Chrissy Houlahan for a canvass kick off in Reading. On Thursday, Perez participated in a “Seat at the Table” event, a listening and training tour “for and by black women” with the intention of giving a chance of influencing the DNC, in Pittsburgh.

The Pennsylvania GOP believes the tour made by national Democrats in PA is a sign that they are on the defensive.

“The attention given to Pennsylvania by national and out-of-state Democrats shows just how worried they are about the unpopularity of their message in Pennsylvania and their statewide incumbents losing in November,” said PAGOP Communications Director, Jason Gottesman.

He also went on to tout the current state of the economy as reason the GOP feels confident. “Just today, Gallup released a poll showing Democrats now favor socialism over capitalism,” Gottesman said. “Their message and continually catering to the far-left wing of their Party does not resonate with moderate Pennsylvanians.”

Perez expressed a much different tone in multiple interviews with different media outlets from across the state.

In an interview with WESA, Perez discussed the victory of Conor Lamb and other various special election races across the country as motivation for November.