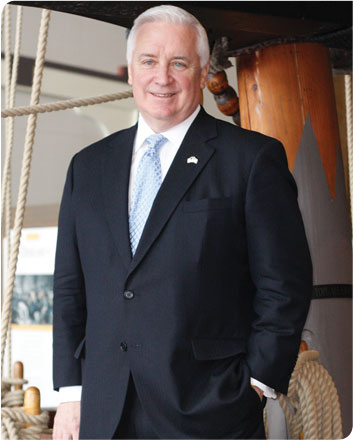 When he endorsed Chester County entrepreneur Steve Welch for U.S. Senate, Governor Tom Corbett emphasized the geographic balance that Welch brings to the ticket and his party-building efforts.  But in a recent conversation with 1210 WPHT’s Dom Giordano and again with conservative writer John Gizzi, Corbett brought up another explanation for Welch’s party switch: Operation Chaos.

“My understanding, the explanation from him and from his campaign team is, in ‘Operation Chaos’ four years ago, I think it was Rush who was encouraging everybody, go switch your party and go and vote for Obama in order to beat Hilary,” Corbett told Giordano on February 21.

“People did that, in fact Steve says that he did that, and that he voted for Obama in the primary, not in the general election.”

‘Operation Chaos’ refers to the 2008 effort by Republicans to draw out the Democratic presidential primary. Talk radio host Rush Limbaugh and other conservatives encouraged supporters to re-register as Democrats and vote in various key states.

He repeated the claim to Human Events writer John Gizzi in March.

“My understanding is that he did this as part of ‘Operation Chaos,’” Corbett said.

But there’s a problem. Welch switched from Republican to Democrat in 2005, not 2008. ‘Operation Chaos’ had nothing to do with it.

Nor is there any evidence to suggest Welch has ever claimed otherwise. Indeed, whatever you think of his switch, Welch has been being forthcoming on the subject. In many forums and interviews, he has actually been the first to raise the subject.

He says the GOP had lost its way. “I got disgusted at George W. Bush’s spending policies, especially the prescription drug legislation and ‘No Child Left Behind.’  So I got mad and became a Democrat in ’05,” Gizzi quoted Welch in an October article.

Welch voted in the 2008 Democratic primary, but says he voted for John McCain in the general election. He switched back to the GOP in early 2009 and ran for Congress briefly against Rep. Joe Sestak and later in the 6th district while Rep. Jim Gerlach was running for Governor.

However, he has justified his primary vote for Obama as a vote against Hilary Clinton.

“I never supported Obama in any way, shape or form. I was registered in the primary of 2008 as a D and voted for what I thought was the lesser of two evils at the time,” Welch said during a recent interview on WILK radio. “I would say I voted against Hillary Clinton. Looking back, like probably most Democrats at this point, it was the wrong choice but at the time, I would take Clinton, you saw somebody who had already tried to push the national takeover of health care when she was the first lady.”

The state committee’s decision to endorse – at the strong urging of Gov. Corbett – has been the cause of much consternation thus far in the primary. Some of the flak has spread to Welch himself.

Critics of the PAGOP’s practice of making endorsements, and of course Welch’s opponents, are keen to note Welch’s party switch.

Did Corbett’s mistaken impression about ‘Operation Chaos’ lead the Governor to back Welch?

“I’m not sure why he made that connection. It may have been something a supporter said. But I never heard any conversation where Steve or his campaign ever mentioned Rush or ‘Operation Chaos’ or anything of the sort as a reason for the switch,” Nutt said.

“The Governor decided to support Steve after meetings with him, [Tim] Burns, and a phone conversation with [Tom] Smith. Steve and Burns promised to honor the committee process, and from there it was a regional breakdown.”

In both interviews, Corbett noted other reasons for his endorsement including Welch’s party-building. “He’s been helpful to the [Republican] party, a successful businessman,” Corbett said to Gizzi. He added that Welch adds geographic balance to the ticket.

“I think of all the [GOP statewide] candidates, Steve’s the strongest,” Corbett told Giordano.