Does Your Member of Congress Vote With Biden? 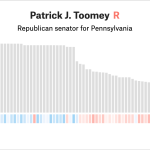 Recently, we reviewed work by FiveThirtyEight on the topic of “Does Your Member of Congress Vote With or Against (Joe) Biden”?

Given the rhetoric over the past few weeks from statewide candidates about the 46th president, PoliticsPA felt it would be beneficial for our readers to review just how often our Senators and Representatives in the House support or oppose the position of the president.

In what should come as no surprise, Senator Bob Casey has voted 43 of 44 times (97.7 percent) in line with Biden’s position. Last December, Casey voted “Yes” for providing congressional disapproval of the sale of certain weapons to Saudi Arabia. The president opposed and won, 67-30.

Retiring Senator Pat Toomey has cast votes along with the president just 12 of 36 times (33.3 percent). In the two most recent occasions, Toomey voted no on the sale of weapons to Saudi Arabia in line with Biden, while he also backed the July 2021 measure to provide emergency funding for Capitol security in response to the Jan. 6 attack.

When Toomey has supported Biden’s stance, the votes have been lopsided.

Toomey has also supported the nominations of five cabinet members.

On the Democratic side, all nine representatives have voted in lockstep with the president.

Of that group, only one faces a primary challenge – Dwight Evans – who takes on Alexandra Hunt and Michael Cogbill in PA-03 on May 17.

The eight-member GOP delegation to the US House runs the gamut from supporting Biden a little more than half the time to rarely if ever.

Brian Fitzpatrick (PA-01) has cast his votes alongside the president 32 of 57 times (56.4 percent). His vote has helped turn the tide in some difficult House decisions on:

Fitzpatrick also cast a vote in support for establishing a commission to investigate the Jan. 6 attack on the U.S. Capitol. He faces a primary challenge from Alex Entin.

Dan Meuser (PA-09) cast votes one out of every six times with Biden (16.7 percent). The closest vote was last June when he supported providing contraceptives to veterans without co-pays (245-181).

Thompson and Smucker backed Biden to allow farmworkers to get legal immigration status (247-174), while Joyce joined to expand health care eligibility for veterans exposed to toxins (256-174).

Guy Reschenthaler (PA-14) and outgoing representative Fred Keller (PA-12) supported the president’s position one of every 11 times (9.1). Reschenthaler and Keller have lent their support to lopsided wins, including ending forced arbitration for sexual assault and sexual harrassment cases.

The representative of Cumberland, Dauphin and York counties has voted just once in line with Biden – to provide emergency funding for Capitol security in response to the Jan. 6 attack (416-11).

None of the six face a primary challenge.